The Old Man of Coniston

A fabulous weekend for hiking saw us attempt The Old Man of Coniston in the Lake District. 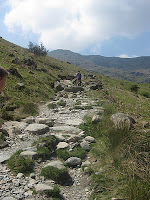 I’m not sure if it was the weather or the steepness of the climb which made it our most difficult walk yet. There was some spectacular scenery as we walked past abandoned mines and spoil tips. 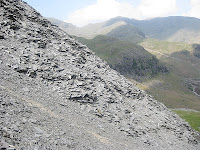 Just before the top of the mountain we found the tarn, Low Water. 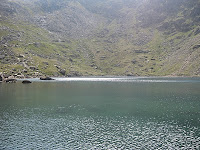 We stopped and cooked sausages on a disposable BBQ while the children played in the water and Neil continued to the summit alone where he took the photograph below. 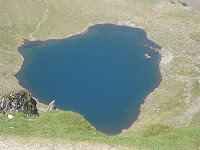 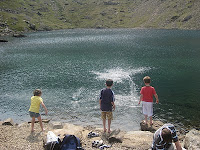 During the hike I introduced the children to Kendal Mint Cake. We sucked the minty squares as we climbed the crumbly, slate-strewn paths and later as we skidded our way down again. It took us 4 hours to walk the four miles from top to bottom. When we got back to the car we were boiling hot and streaked with dust, but pretty pleased to have got as far as we did, despite not making the summit this time.
Posted by Carys at 10:43 2 comments: Links to this post 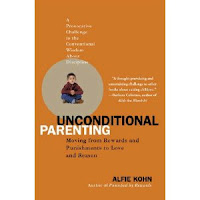 Unconditional Parenting - Alfie Kohn
A difficult read for anyone who has had a very religious or authoritarian upbringing because of the way it challenges the whole foundation of reward/punishment parenting and discipline. This book was thought-provoking, but Kohn spent chapter after chapter listing all of the ways NOT to parent without giving especially helpful alternate strategies. Practical solutions, when offered, appeared to me at least to be highly impractical: he describes how one of his children took ages to get ready every morning and made life difficult for the family. When asked to address this behaviour the child decided to go to bed at night already dressed for school. Anecdotes like this one provided the basis for Kohn's practical advice and while I did take on board much of what he said about unconditional love, I ultimately felt that he used scare tactics in many instances to convince parents to negotiate at every turn or risk children growing up feeling unloved. 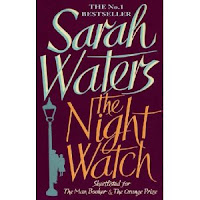 The Night Watch - Sarah Waters
Interesting structure which works backwards to 'fill in the gaps.' An enjoyable read with some beautiful prose, but not as satisfying as I had hoped.

Another slow starter. Gripping in parts and very frightening in the middle section. Lovely first person narrative and excellent characterisation of individuals who are both likable and unpleasant at times. Beautiful, descriptive prose. The lack of resolution left me disconcerted and somewhat dissatisfied, but I have to concede that it’s probably too much to expect a rational explanation at the end of a ghost story. 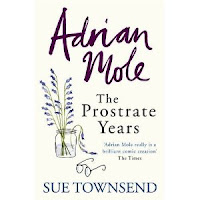 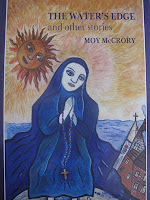 The Water's Edge - Moy McCrory
Lovely short stories about growing up in Liverpool with Irish, Catholic parents and the feeling of unbelonging that comes from being raised in England while not feeling English. Some very funny observations about superstition, gender roles and the way that religion can take over every day life. An enjoyable, linked collection of stories.
Posted by Carys at 12:18 No comments: Links to this post 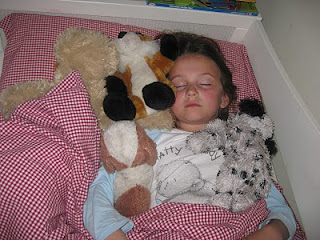 Went to tuck Alice in this evening. She was already asleep. 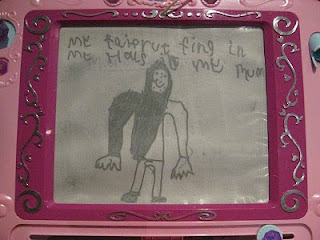 By the side of her bed: my faifrut fing in my hous is my mum.

(Even though I look like the Incredible Hulk)
Posted by Carys at 21:03 2 comments: Links to this post 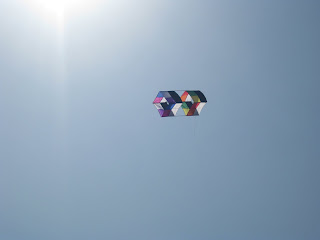 Yesterday we went to Southport beach to fly our kites. It’s always windy at Southport beach and there isn’t usually any sea to see – it’s not the sort of beach anyone would relax and sunbathe on, but it’s great for a spot of mountain biking and kite flying. 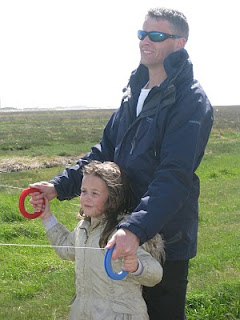 The wind was strong and despite the coldness of the day, the sky was bright blue. I watched the kites weaving and curling and wished that it was me attached to the extendable string. It made me wonder if there are stories about people who can fly (Superman excepted). Sam told me that he has a book called 'The Boy Who Could Fly.' I asked him if it was any good.

'It's a bit childish,' he said.
Which is probbly to be expected, as it's a children's book. I've since added it to my 'to read' list.
I’m writing a story about a woman and a cherry tree at the moment, but I’ve made a note to take the kites out again soon because I’m sure there’s a story about flying waiting to be written.
Posted by Carys at 18:36 No comments: Links to this post 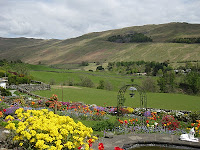 Hiking this year has been marred by bad weather and a distinct lack of enthusiasm (probably related to said bad weather). Our recent trip to Troutbeck, near Windermere, involved an easy walk of a couple of miles, but the kids had to be cajoled and coaxed at every turn. Creating new story lines for Dr Who proved to be a popular diversion for a time, but the mood really improved when we came to some water. Pooh-sticks and paddling fended off episodes of the grumps and we made it to the end of the walk in a mostly cheerful state. Fingers crossed for sunshine and enthusiasm next time. 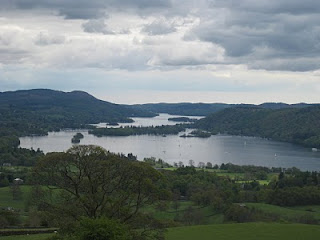 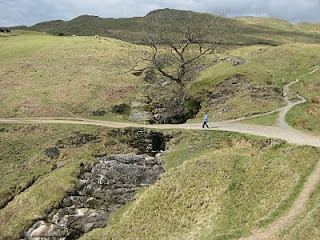 
Recently I’ve been messing about with some poetry. It’s probably not a good time for messing about as I’m supposed to be finalising my MA manuscript, however it’s been fun to write in a more compact way. I’ve written several daft poems about parenthood including this one:-

And not
as we know it.
Yesterday I spent the morning making a birthday cake for one of my boys. I told him that he could have whatever he wanted (mistake number 1) and that he could print off some cakes from the internet (mistake number 2) for me to look at. He picked the fabulous cakes here and here (second cake down). I didn’t explain that his cake wouldn’t have three or four or even five tiers. I took it for granted that he was imagining something on a slightly smaller scale. It took me all morning to make the cake below. I thought it was quite good. It had a monster as requested and was also castley as specified. 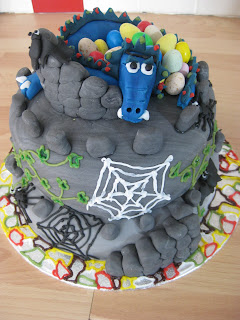 
Initially I thought he was joking.
‘You can’t be serious?’ I said, like John McEnroe.


‘I hate it,’ he repeated.
I was subsequently torn between the desire to tell him not to be such an ungrateful toad and the urge to pick up the grey lump of it and chuck it in the bin.


I’ve been trying very hard over a number of years not to censor the children at home. It seems that there has to be one place in the world where they can say exactly how they feel. I find however that I don’t like their honesty. I find I would prefer a polite lie, the kind of lie that I use when thanking them for potted plants on Mother’s Day.
I stood next to the cake, prickling with disappointment. His face quivered, wobbling around various expressions, searching for the best one to strike – somewhere between anger and surprise at having been so simultaneously brave and rude. 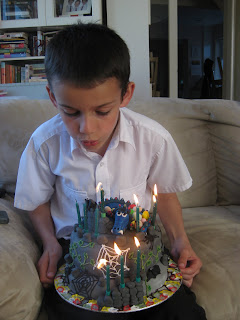