Not so itsy-bitsy bikinis

It was good to see Primark recall their padded bikinis recently. I'm sure no-one would dream of selling padded swimming trunks to boys of seven. 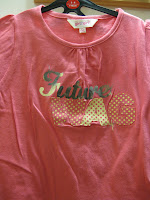 Perhaps Primark (and other retailers) would like to revise some of the writing on their t-shirts for two year olds next.

Dan Garavelli writing in the Scotsman maintains that, 'Even more damaging than the sexual aspect of many fashion lines, in my opinion, is the way they are designed to limit girls' horizons; to present them as a bunch of silly bimbos. So there are T-shirts with slogans such as 'I left my brain in my locker', 'Future Footballer's Wife' or 'Catwalk Ready'.

I don’t want my little girl parading about in a bikini stuffed with padding. Equally, I don’t want her going through life with her brain stuffed with fluff.
Posted by Carys at 12:52 No comments:

Since my last blog entry I have read three very different books; Landor’s Tower by Ian Sinclair, The Handmaid’s Tale by Margaret Atwood and Where the Heart is by Billie Letts.

Landor’s Tower was a book that required a plough, a whip and a team of horses to negotiate. It was probably the most ‘difficult’ book I have ever read. Robert Sheppard’s book on Sinclair contains the following quote: ‘If you read Sinclair only for the story, you would hang yourself.’ I have to agree. Although the writing was sublime, the narrative was fragmentary, incomprehensible and confusing. If I hadn’t needed to read the book for my MA, I would have given up. Having said that there were some wonderfully descriptive passages that still make me smile when I think about them:

‘Now in the midsummer heat flies were upon him. They liked him, they loved this crazy Jewish diabetic. They described him, ravished him with tender, frenzied tongues. They bit and burrowed among the black hairs and salty craters of Silverfish’s wrist. They danced in his sweet blood, extending and retracing a multiplicity of jointed legs’ (p.6).

‘But native Bull Ring Birmingham is like gargling with glass, all the lithium flatness of Leicester with added gravy browning. Language is mangled, gobbed into an uncut string of consonants – like sausage meat’ (p.106).

There are hundreds of other examples of Sinclair’s wonderful way with words, but I prefer some story with my language and never really got into the book in the way I had hoped to. Contrasting reviews of Landor's Tower can be found here and here.

Where the Heart is was an easy read. The beginning of the book was better than the middle which was lumpy and galloped along with all of the finesse of a small child’s narrative - ‘and then, and then, and then...’ Suddenly several years had passed, punctuated by harrowing incidents of child abuse and mutilation which were glossed over because everyone was either okay or deserved what they had got from the karma fairy. I might do a more extensive review of this book before the book club meet to discuss it next month.

The Handmaid’s Tale by Margaret Atwood was a delight of a book which I gobbled in one sitting. It has been a while since I stayed up past one o’clock in the morning to finish a book. Atwood illustrates beautifully that patriarchy + fundamentalism = bad news for women. My favourite part of the novel came at the end, as a male professor of history attempted to sanitise the brutality of The Republic of Gilead by claiming: ‘our job is not to censure but to understand’ (p.315). When these words are juxtaposed with Offred’s narrative they draw a thick red line through the kind of apologia that defers to the ‘culture’ and ‘context’ of repressive regimes by excusing their violence and brutality to women. It’s a book I will definitely read again.
Posted by Carys at 19:38 No comments: 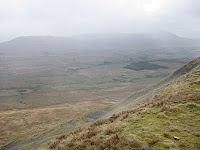 On Easter Sunday we decided to climb a mountain. The weather forecast was good, everyone was buoyed by early morning chocolate treats and we set out enthusiastically. As we approached Whernside Peak it started to rain. As we began our ascent it started to hail. By the time we were half way up the mountain it was snowing. We finally reached the top after a lot of muttering and grumbling and took shelter behind a stone wall as the snow turned to hail again. 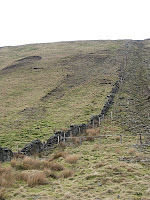 The ascent was quite gruelling, so when we noticed an alternative route down that looked shorter, if considerably steeper, we decided to take it. We were joined by a couple of more experienced climbers, one of whom slid about a hundred feet down the mountain on his backside. The children laughed volubly and the climber turned to ensure them that he had actually done it on purpose (he probably had) which made them laugh even more. It wasn’t long though before everyone stopped laughing entirely in order to give their absolute concentration to getting down the sheer mountainside. Jo and Neil both fell, but not far. The rocks were slick with slime and liable to slide, resulting in several mini avalanches. We hadn’t realized that the route is an old one which is no longer maintained and comes with a danger warning due to erosion, bogginess and the extremely steep descent. 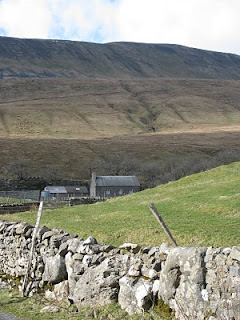 It took us more than two and a half hours to edge down the mountain. Once the steepest part of the climb was over we had to wade through a bog. I stopped worrying about trying to find dry patches when I was wet up to my calves. The day began to take on a hideous sort of hilarity and every so often the children would clutch each other and double over laughing which led to sliding into the bog and more laughter.
What kept me cheerful was looking over my shoulder to see where we had been. I kept saying look what we’ve done. That, for me, was the best part of the day; the hail, snow, rain, soaking feet and legs, zinging muscles etc were all worth the pleasure of looking over my shoulder and thinking I climbed down that. I took the picture above when we finally reached the bottom. I'm sure there are some life/hiking metaphors to be found in t 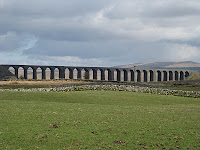 his story, but I'll leave them somewhere over my shoulder in the long grass and muddy water of the Whernside bog.
For better photographs of Whernside see here.
Posted by Carys at 13:09 No comments: 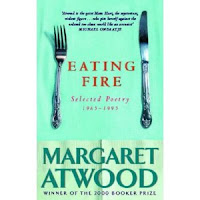 I've read a lot of Margaret Atwood's poetry this week. I've even written some poetry myself, something I haven't really done properly since the second year of my BA. Atwood's poetry is the sort of poetry I enjoy, it's both transparent and opaque, she uses language in original and interesting ways, a first reading of each poem makes sense; a second reading makes sensation - a feeling of yes, I wish I'd thought of that.
Here is a poem that I particuarly like:

My daughter crackles paper, blows
on the tree to make it live, festoons
herself with silver.
So far she has no use
for gifts.

What can I give her,
what armor, invincible
sword or magic trick, when that year comes?

How can I teach her
some way of being human
that won't destroy her?

I would like to say, Dance
and be happy. Instead I will say
in my crone's voice, Be
ruthless when you have to, tell
the truth when you can,
when you can see it.

Peer marking and a policy not to correct spellings.

I try not to use my blog as a soapbox - can you feel the BUT coming here...
I attended my oldest son’s Review Day last week – it’s the new way of doing a Parents Evening. At Parents Evenings my parents had the opportunity to speak to each subject teacher and find out how I was progressing, however for the Review Day Neil had to take a day off work and we got to speak to someone who had never met our son but had been given the task of collecting a list from his form tutor which comprised of a sentence from each subject teacher: it was like playing Chinese whispers, but not as funny.


Teacher: Sam is a bit behind with his English target.
Me: Why?
Teacher: I don’t know. That’s all it says here.
Rinse and repeat... 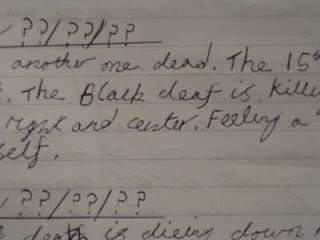 I was anxious to ask about spelling. Sam’s spelling is atrocious: his history book contains numerous references to the Black Deaf. When I was at school spellings were corrected. At Sam’s school it is ‘school policy not to correct spelling mistakes unless they are made in English’ (the subject English, not the language).


I was also anxious to ask about marking. Sam’s work is almost never marked. The teacher told me about peer marking, the wonderful new way of marking work – the kids mark their friends’ work and vice versa, apparently it’s brilliant and saves the teachers lots of time. My parents are teachers. It’s entirely possible that I will give in one day and get a PGCE too. Saving teachers’ time is a good idea. However, Sam is attempting to revise for his exams right now. The majority of his work has not been seen by his teachers, it has been marked by his mates. When he has got things wrong there are no corrections, no comments, no observations. Some of the answers which are marked incorrectly are correct. How can he revise if he doesn’t know where he has gone wrong and if on some occassions when he appears to have got it wrong, he has actually got it right?


In the week before the Review Day we were informed in a letter from the Headteacher that he was certain that feedback from the event would be even more positive than that of the previous year. Sure enough, we were subesquently told that this was the case. I feel like I’ve taken part in a rigged election. My feedback was negative. None of the parents I have spoken to admit giving positive feedback: I want a recount.


Other things I want:
I want someone to help my son with his spelling.
I want teachers to mark his work.
At Review Days I want to talk to someone who has met him and knows his name.
I want to meet his subject teachers and find out where and how he can improve.
I want him to get homework that doesn’t involve copying things from the internet.
When Sam started school in 2001 I took it for granted that he would get these things. Silly me.
Posted by Carys at 23:04 2 comments: