I'm having a bit of a break from Blogging, Facebooking and Tweeting in order to try and concentrate on real life things such as the WIP (which doesn't have a name yet).

I'll be popping back to mention May's Word Soup and the Edge Hill Prize ceremony, but for the most part it's going to be pretty quiet around here. 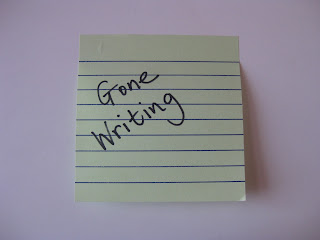 Tucked up on the ward and secure in the latest technology, Zelda is about to give birth to her baby. But things don’t go to plan, and as her labour progresses and the drugs take over, Zelda enters a surreal world. Here, past and present become confused and blend with fairytale and myth. Old secrets surface and finally give birth to disturbing revelations in the present. Originally published in the eighties, The Birth Machine was seized on by readers as giving voice to a female experience absent from fiction until then. It was acclaimed as a significant event in women’s publishing and quickly became a classic text. Out of print for some years, The Birth Machine is now reissued in a revised version (which first appeared in 1996). Still very relevant today to modern Obstetrics and Medicine, The Birth Machine is however more than that: it is also a gripping story of buried secrets and a long-ago murder, and of present-day betrayals. Above all, it is a powerful novel about the ways we can wield control through logic and language, and about the battle over who owns the right to knowledge and to tell the stories of who we are. The book was dramatised for Radio 4 and starred Barbara Marten as Zelda.


As I began to organise my response to this book I realised something; I don't like thinking about childbirth: I avoid TV programs about it, I've never been present while anyone (except for myself) has given birth, I’ve never written a birth scene and I’ve never tried to describe labour to a first-time mum because I think it’s hard to strike a balance between honesty and kindness - something a woman in my first ever antenatal class illustrated when she claimed that during a previous labour, she’d been butchered from ‘top to bottom’ and had needed thirty stitches (the midwife later assured me that the woman was lying as no-one counts the stitches because they’re done in layers, depending on the depth of the tears, which of course made me feel much better...).

Occasionally, one of my children asks me to tell them the 'story' of their birth. My response is mostly fairy tale, mixed with a few factual details re. the date, time and method of delivery etc. Such an account combines magic and science, but a more honest reflection would probably result in something that is part fairy tale, part horror story and in many ways I think The Birth Machine is such a narrative.


The Birth Machine is a fascinating read. In the Author's Note, Baines reveals that the structure of the novel is intended to:

'ween the reader (and in particular the unwilling or squeamish reader) gradually from the safety of 'objectivity,' via a growing familiarity with Zelda through her memories, to the shock of her subjectivity - though even then her experience is presented as flashback, in third-person past tense: Zelda herself, leave alone the reader, can only contemplate it at a distance.'

Baines achieves her aim. The Birth Machine is uncomfortable and claustrophobic, the first novel in a long while to make me feel both disquieted and queasy. In the opening scenes, the reader is invited to observe Zelda - 'the patient' - as she is connected to 'the machine'.

The Professor's words set the tone for Zelda's interactions with medical staff throughout the novel. She is repeatedly patronised: ‘Naughty girl, now, Mrs Harris,’ 'Mrs Harris! What on earth are you doing out of bed,' 'How are we doing Mrs Harris?' The reader initially sees Zelda through the eyes of the Professor and his students. Baines writes that 'the whole is undercut by satire, and a questioning of the authority of the professor [is] thus prompted.' While this is certainly the case, the medical professionals also make the hospital scenes confining and distressing as their powerful, infantilising voices serve to propel Zelda again and again into childhood memories. The dream-like quality of these and other memories blend with myth and fairy-tale to further distance the reader and evoke feelings of powerlessness and disorientation.

During moments of greater lucidity, Zelda attempts to look beyond the haze of pain to uncover the reasons for her induction. She wonders if she is at fault: 'bad veins, bad placenta, inadequate mother,' 'She got too fat, and she deliberately slimmed again. She distorted the chart.' Throughout the novel Zelda has no say in what happens to her body - she isn't even allowed to go to the toilet: 'No getting out of bed once your waters have been broken.' Following delivery, Zelda's baby is removed: 'The baby is gone. They have taken it away. And she hasn't even touched it.' Even the hospital notes are, 'Not her notes at all, whatever she calls them. Hospital property. Private information.' Her lack of autonomy and control ensure that the discovery of the reason for her induction is a triumphant moment - knowledge is power and once Zelda is in possession of this particular knowledge she finds herself at last able to 'acknowledge her own insights, to be her own author.'

Lisa Glass makes the following observation in her excellent review (link below) 'I was in awe of the masterful examination of polite cowardice and of the barriers constructed to prevent women from asking questions about their own bodies.' I too found the masterful examination of 'polite cowardice' compelling, but I was also impressed by the way this novel weaves and twists; the way in which the disorienting world of pain allows secrets from the past to meld with imagination and, at times, hallucination to create a disturbing and thought-provoking meditation on power, control and the uncertain language of logic.

Read excellent reviews of The Birth Machine here and here.
Posted by Carys at 17:39 2 comments:

You can read my reviews and follow links to interviews, blogs and other reviews by clicking on the authors' names. The winner will be announced on 5th July at a ceremony at the Free Word Centre in London.

The best of luck to the shortlisted authors. I can't wait to find out who wins.

Next year, I won't be assisting with the prize. I'll miss the reading so many outstanding collections - attacking an enormous pile of books is my idea of heaven - but I plan on being extremely busy with my PhD thesis and novel.
Posted by Carys at 15:27 No comments:

I've been holding my hopes in a headlock since the announcement of the Scott Prize shortlist back in February. I haven't allowed myself to so much as contemplate winning the prize: no imaginary book launches, no pretend book covers - nothing. Perhaps that is why last night's news was so hard to digest. When I put the telephone down, I wondered if I'd imagined Jen Hamiliton-Emery's voice and it wasn't until several hours later, after the announcement was posted online, that it really began to sink in. I spent the rest of the evening saying asinine things like, 'I'm going to have a book, and there'll be a cover!'

Jen Hamilton-Emery has said the following about this year's prize:


‘Since developing the Scott Prize to promote and support debut short story writers, I have read and selected winners from hundreds of manuscripts. This year my task was made particularly difficult by the astonishing level of skill within our shortlist and I would recommend everyone to spend time discovering those writers. Making selections from the shortlist has been difficult but I have focused on the books which I believe have a depth and maturity of talent that all readers will immediately recognise. Carys Bray and Rob Roensch combine impeccable craft with unforgettable imagery to create stories that are surprising, psychologically resonant, emotionally complex and, above all else, a sheer joy to read. Carys and Rob, on either side of the Atlantic, both demonstrate that the short story is thriving and developing in the 21st century and I look forward to working with the writers and publishing their books later this year.’

Last night I celebrated by eating half a tub of Haagen Dazs and having a bath. Now that the news is beginning to sink in, I think I'm going to have to find a better way to celebrate...
Posted by Carys at 11:31 8 comments: