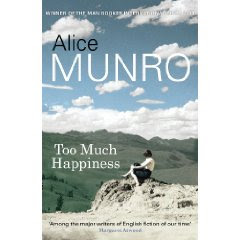 I recently cleared some space on the bookshelves at home and just in time too, as 4 second-hand copies of various Alice Munro short story collections arrived in the post this afternoon.

Here is an interview with the fabulous Alice Munro. In it she talks about being appalled at the ending of Hans Christian Anderson’s The Little Mermaid as a child. She walked around the outside of her house, making up a happy ending to the story; the mermaid got the prince and she didn’t have to be changed to foam on the sea! Munro describes this moment as the beginning of her writing career.

Munro won the Inernational Man Booker Prize in 2009.
Posted by Carys at 00:07 No comments: 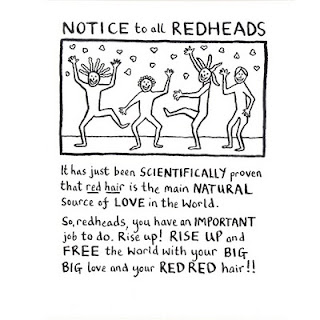 The interesting thoughts of Edward Monkton have always made me laugh. The creator of Edward Monkton, Giles Andreae, gives a frank interview here about his recent depression and his career as a writer of comic books and cards.
And in honour of all red-heads (and in stark contrast to Tesco's Christmas cards of 2009) here is Giles Andreae's or rather, Edward Monkton's take on red hair.
Posted by Carys at 19:51 No comments:

We're not having a lovely time

I learned a long time ago not to make exclamations like, 'isn't this great' and 'aren't we having a lovely time?' on family trips. Even if we are in Disneyland, I know that such exclamations are likely to induce an unenthusiastic response that doesn't just rain on my parade, it pours.
Last summer we went to London for a couple of days. We had a lovely time. On the way home I overheard the following conversation:
Jo:           Alice, what did you like best about London? 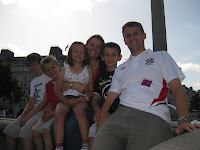 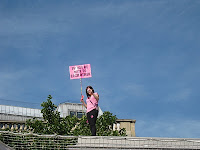 Occasionally I forget myself and start to provide a commentary to a particular piece of fun we are all enjoying, only to stop mid-sentence and pretend that I was about to say something else. I try to remember those good moments, rather than articulate them. And if that doesn't work, there's always the camera. Here we are, having a fabulous time in Trafalgar Square. The woman on the plinth was carrying a sign which read 'please be nice to each other.' Niceness and the above exchange between Jo and Alice are the themes of the short story that I am currently working on. So far I've got three sentences, I'd better get on with it!
Posted by Carys at 22:24 No comments:

Review: 'The Accidental' by Ali Smith

As a former musician – I use the word ‘former’ advisedly, every time I get near a piano nowadays, four pairs of hands are at the ready to “help” with the notes – the word ‘accidental’ conjures musical connotations. An accidental involves the introduction of a sharp, or a flat, or a natural note, which essentially breaks the rules of the key signature; it results in a note that does not belong to the scale of the piece. This is how I picture Amber, Ali Smith’s mysterious visitor who turns the lives of a family on holiday in Norfolk upside down. Amber does not belong and she alters the whole scale of the family.

Amber’s arrival at the family’s holiday home requires a slight suspension of disbelief – I can’t imagine living an existence so fractured that I wouldn’t think to check with Neil if there was a visitor coming - however, I was more than happy to suspend my disbelief, in fact I would have expelled it entirely just to continue reading Smith’s fabulous prose. The ultimate consequences of Amber’s visit also raise some doubts regarding practicalities and feasibility, however the symbolism of Amber’s act (can’t do spoilers, so this is very vague) is striking and, it turns out, just what the family needs.
The novel is told in the third person, but with masterful use of free indirect discourse. Smith moves from 12 year old Astrid, to 17 year old Magnus, to Eve the mother and to Michael, step-father, serial adulterer and university lecturer. Each voice is so distinct and well crafted that Smith doesn’t have to announce who is speaking as the chapters change: you know immediately. Michael was by far my favourite character. He was pompous, pretentious and self-centred. Part of the enjoyment of the novel was waiting for him to get caught with his trousers down (metaphorically, as it happened). His poetry was delightfully dramatic and initially atrocious, although it improved as his character became more sympathetic and by the end of the novel I felt some (small) degree of empathy for him.

The ending of the book took me rather by surprise. Yet as I mulled it over in my head, I realised that there was really no other possible ending. While the ending is essentially open, or at least the beginning of something new, the characters are not unchanged. Each of the family members learns something from the enigmatic Amber. Eve in particular learns more than we might initially think, and the ending is hopeful, if not resolved, which is exactly how I like my endings to be.
Posted by Carys at 22:29 No comments:

Today we sorted out the children’s bookcases. I hate throwing books away, but it was time to be ruthless. No-one wants to read board books, fabric books or waterproof books anymore; the children are too old and anyway, the books are falling to pieces. Neil and I filled a bin bag with well-loved, well-chewed, well-scribbled-in specimens and made some smaller piles that weren't so grubby to give away to friends with small children. The best part of the throwing away exercise was discovering books which we had forgotten we had. 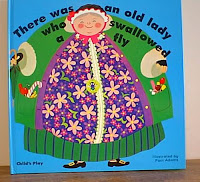 ‘Elbert’s bad word’ for instance: the story of a boy who says a very rude word (no, you never find out what it was!) and shocks everyone into silence at a party. He has to replace the rude word with several marvellous adjectives which he goes on to use next time he needs to express himself loudly. The story of the old lady who swallowed a fly; the same version that they had in my reception classroom in 1980, with a very fat woman gradually filling up with animals through circular holes in the pages. The ‘Pig’s Book of Manners’ in which a boy has such atrocious manners that it takes a pig to teach him to be polite. And some old classics like ‘Hairy Maclary’ and ‘Harry the Dirty Dog’, another classic from my childhood.

For the first time ever there is space on the bookcases in our house. In fact there is a whole empty shelf on one of them. Sad as it was to throw so many old friends in the recycling bin, I’m looking forward to filling the empty space with plenty of new ones in the coming months.
Posted by Carys at 22:11 No comments:

I've been reading short stories recently because there hasn't been time to read anything else! Here is a story by A.S Byatt, 2009 Booker shortlisted author. The story is called Raw Material and takes a rather chilling look at creative writing classes.
Posted by Carys at 20:44 No comments:

Today I came across a second short story by Hilary Mantel, winner of the 2009 Booker prize. It is available to read here. It is called Cinderella in Autumn and the reader gets an idea of what a royal marriage, founded entirely on the bride's choice of footwear, might turn out to be like!
Posted by Carys at 20:36 No comments:

My mum was a great one for bedtime stories. She always read to us when we were small. Sometimes she even fell asleep mid-sentence, slurring with tiredness as she dropped off, which made it all the more entertaining. I fell asleep like this for the first time myself about five years ago - it wasn’t quite so funny then.

I still read at night to three of my children. In the summer we often get through a couple of Famous Five books – I try and censor the sexism as I go: occasionally Anne makes speeches telling the boys to tidy up their own mess. Last summer I decided that we ought to get into the 1950s mood by drinking ginger beer and eating boiled sweets as I read the stories. This went down very well and continued for several weeks until I had some pity on the children’s teeth and brought the whole thing to an end while their smiles were still intact. We got quite carried away with the whole Famous Five thing, though. One of my boys started saying things were ‘jolly’ this and ‘jolly’ that and we even made a papier mache Kirrin Island which mysteriously found its way into the recycling bin when the children weren’t watching.

Bed time stories make me feel nostalgic for a time when my life was simpler, when tiredness was decades away and my only responsibility was to enjoy the book. Those days seem so far away now, but I recently discovered that the BBC has a book at bedtime series. Fantastic news for people like me who miss their mother’s stories.
Posted by Carys at 22:24 1 comment:

Nobody Likes Me ~ Fay Weldon 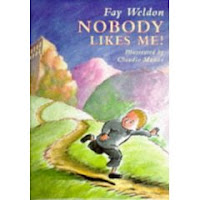 Last night I read a story by Fay Weldon to one of my children before they went to sleep. I bought the book, Nobody Likes Me, several years ago when I was struggling with one of my boys: I wondered if he felt that nobody liked him. The book tells the story of a small boy who comes home from school in a bad mood, tearing up a party invitation and splashing his sister with mud along the way. When he gets home he goes to his room where he shouts and growls for a while before falling asleep under the bed. During his dreams you get an idea of what it might be that is bothering him. Weldon’s prose is simple and effective. She uses a lot of colour when describing things and the illustrations carefully reflect this.

It was only as I put the book away that I recalled that it was by Weldon, and as I squeezed it back onto the shelf, I had to smile. Fay Weldon was a Booker Prize judge in 1983. When it was time to decide the winner, she fatally joked that she couldn’t make a decision without her husband’s help. The men present believed her. One of the claimed afterwards, ‘Fay had to decide but couldn’t...she looked at me blankly [and said] “at home I never make decisions; my husband makes them all” ’ (Martyn Goff). Twenty-five years later, Weldon noted ‘one should never make jokes in the presence of the police, security or at a Booker prize judging.' As I jammed Weldon’s book between a couple of pristine, less loved specimens, I wondered what sort of men readily believe that an author of 21 novels is incapable of making decisions? And I wondered too if it might be rather hard work to like them.
Posted by Carys at 22:27 1 comment: 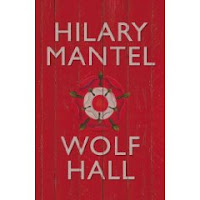 In my research about the Man Booker Prize I came across this short story by Hilary Mantel. I am part way through her novel Beyond Black and Wolf Hall is waiting for me, when I have the time to sit down and actually read something again - sometime after Monday which is my coursework deadline. In the mean time I enjoyed 10 minutes of relaxation and a cup of hot chocolate while I read The Heart Fails Without Warning.