Last night I went to the Costa Book Awards ceremony at Quaglino's. I'm so glad I went, I had such a lovely time. Congratulations to Helen Macdonald who won Costa Book of the Year for H is for Hawk and to Zoe Gilbert for winning the Costa short story prize.

Here are my Best Bits (subtitled: How not to be Cool at an Award Ceremony).

When I arrived at Quaglino's they had pictures of all the shortlisted books on either side of the entrance, which meant I had to get my lovely editor to take a photograph of me. If there was audio with this picture you'd be able to hear her very gently saying, 'You don't need to point to your book, Carys.' 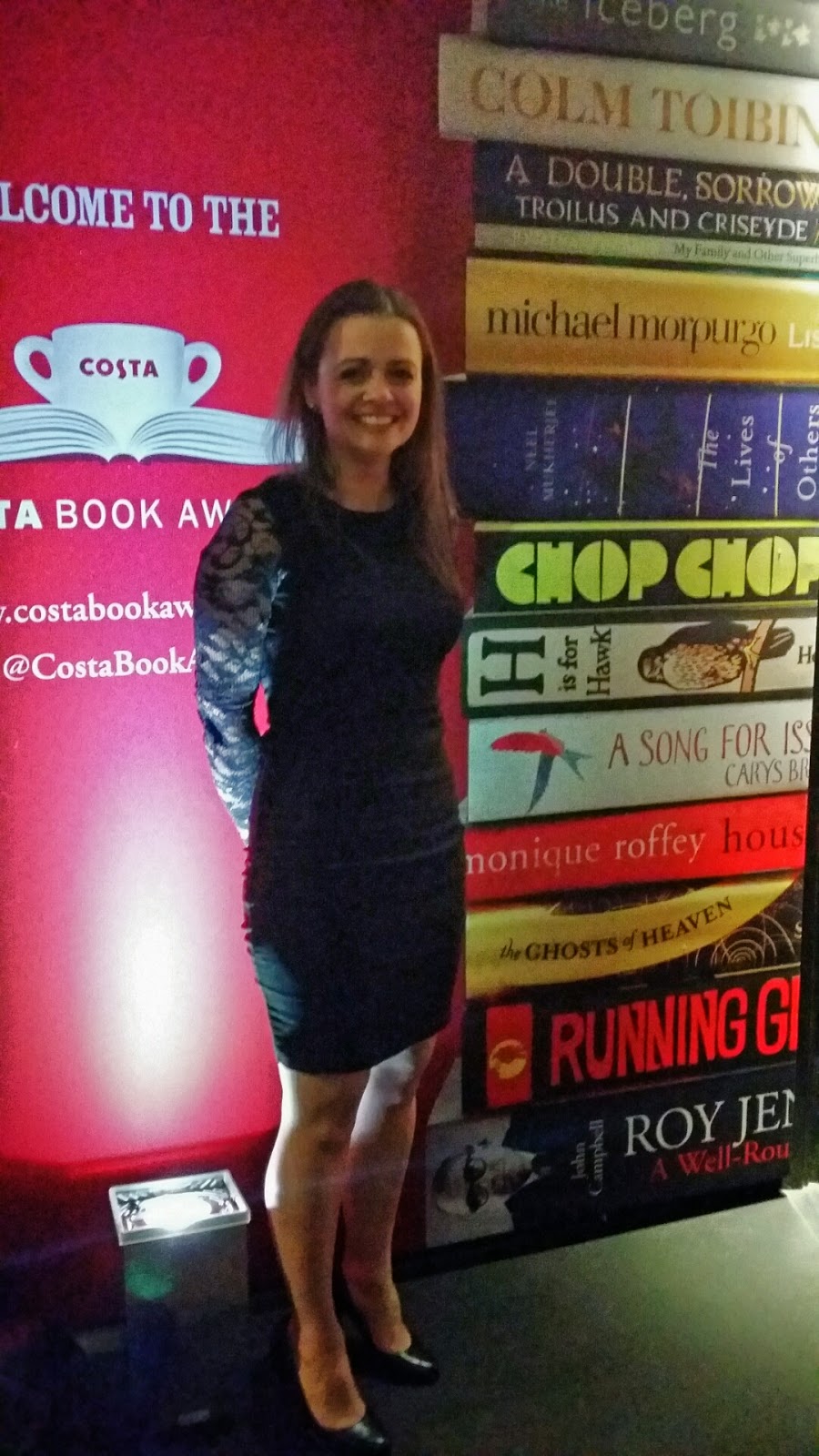 Quaglino's is beautiful. It's very James Bond. See the picture of the bathroom below. I know - it's massively uncool to take a picture of the lovely bathroom (it gets worse...). 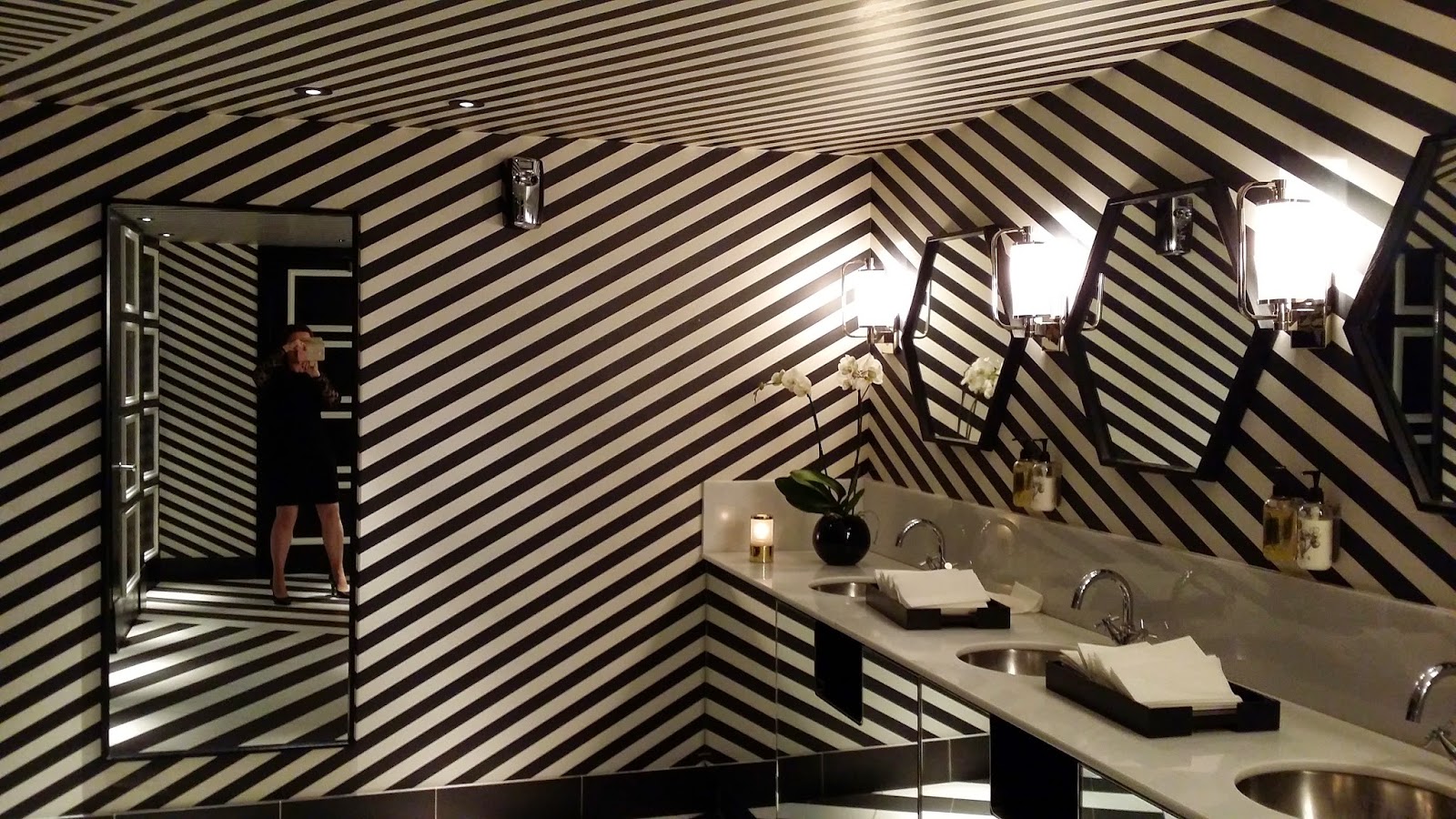 Here's the edge of the stage where they announced the category winners (previously revealed) and the winner of the Costa Book of the Year (decided on the night). Robert Harris gave a short speech before the announcement of the winner, prompting cheers when he remarked that BBC book coverage is a 'disgrace'. He pointed out that there were two dedicated book programmes when we had three channels, but now, with over 300 channels, there isn't even one. 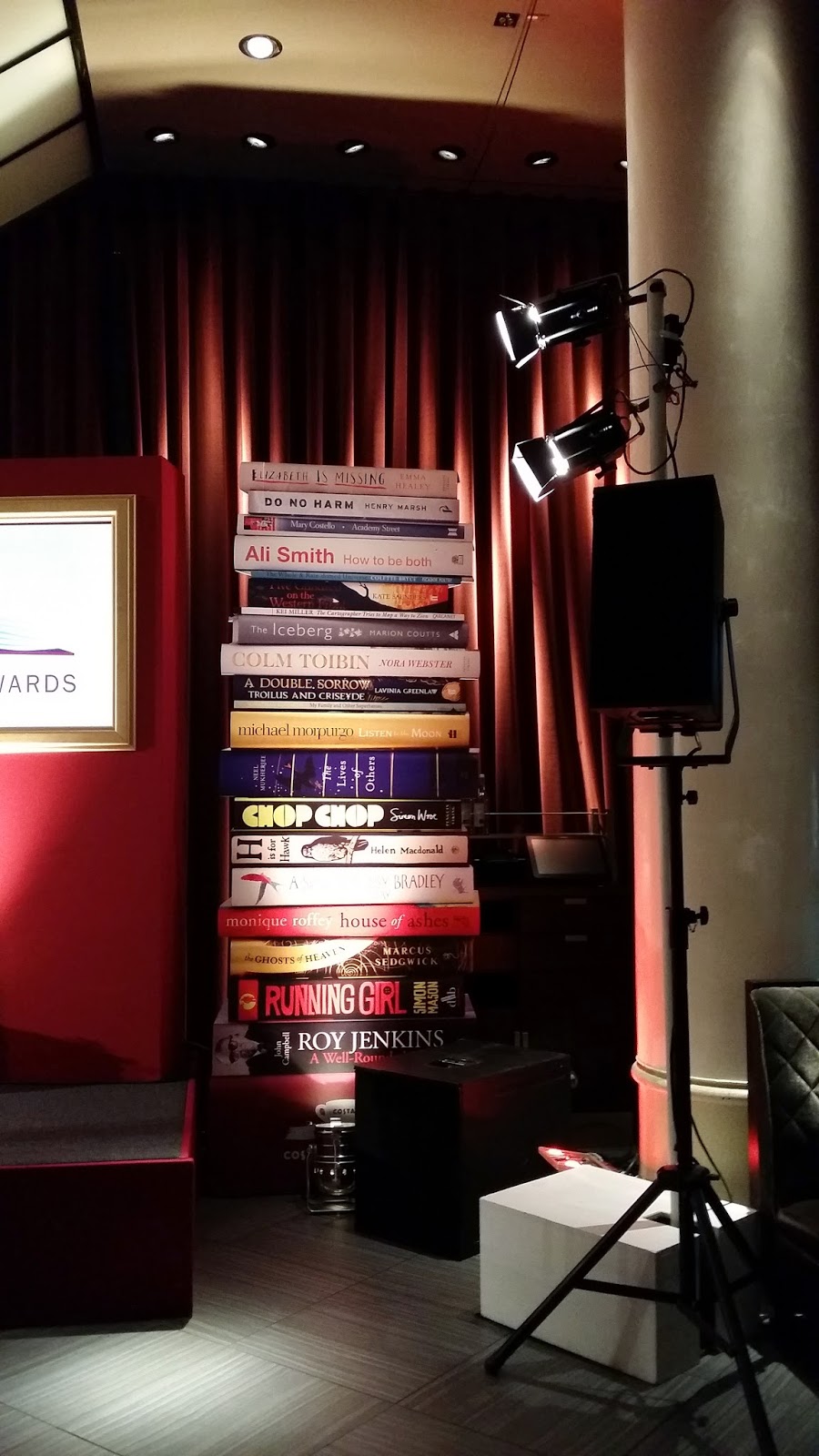 The highlight of the evening for me was meeting Ali Smith, who very kindly listened as I told her about the gushing letter I wrote when I was an Open University student - I'd watched her talking about Sunset Song on one of the Open University dvds and I loved her enthusiasm (and Sunset Song) so much that I went to my local library (which has since closed - you ought to be ashamed, Sefton Council) and borrowed her short story collections. I adored them so much that I decided to write to her, but the letter sounded silly when I read it back, so I never sent it.

No-one writes a close, third person as beautifully as Ali Smith. The Accidental and How to be Both are extraordinary books. When I read Smith's short stories, years ago, I never dreamed for a second that one day I might actually write something worth publishing and end up meeting her. 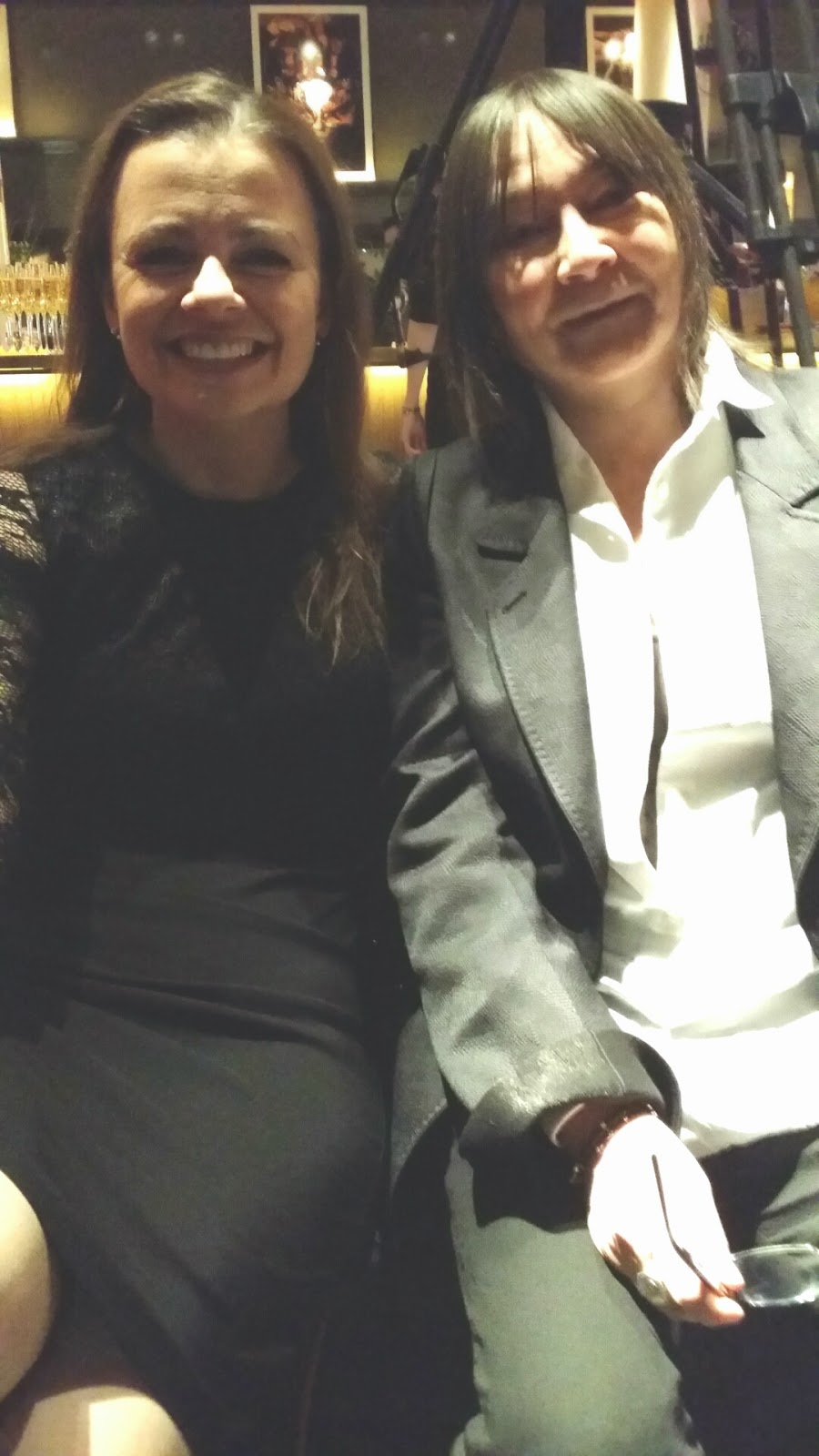 The whole evening was like something out of a film. Wherever I looked there were young men and women holding champagne bottles and trays of canapes, filling glasses that weren't even half-emptied and encouraging people to try one of these, oh, and one of these, too. I had to exercise some restraint as I was already unsteady on my feet thanks to the enormous heels I was wearing, though I may or may not have purloined some of the Costa marshmallows (posh marshmallows, who knew?!) for the kids. 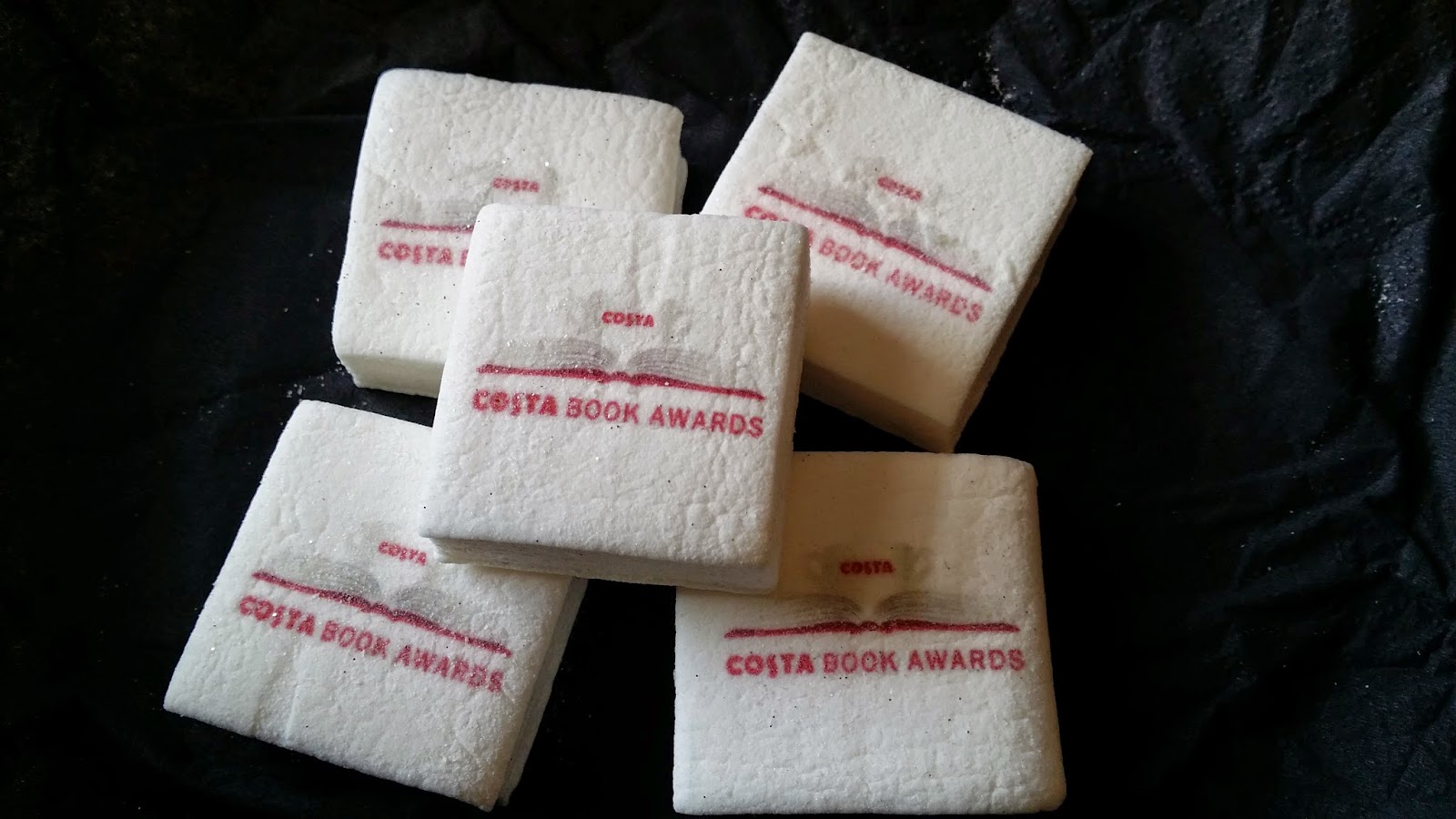 Afterwards, I bought a pizza and went back to my Travelodge, goodie bag in tow (containing a copy of Five Children on the Western Front and a Costa gift card) and I sat on the bed (with slightly numb feet - how do women wear heels regularly?) feeling happy: happy to have been to the ceremony, happy to have been shortlisted, happy to have a lovely editor, agent, publicist and publisher - exceedingly happy and lucky*. 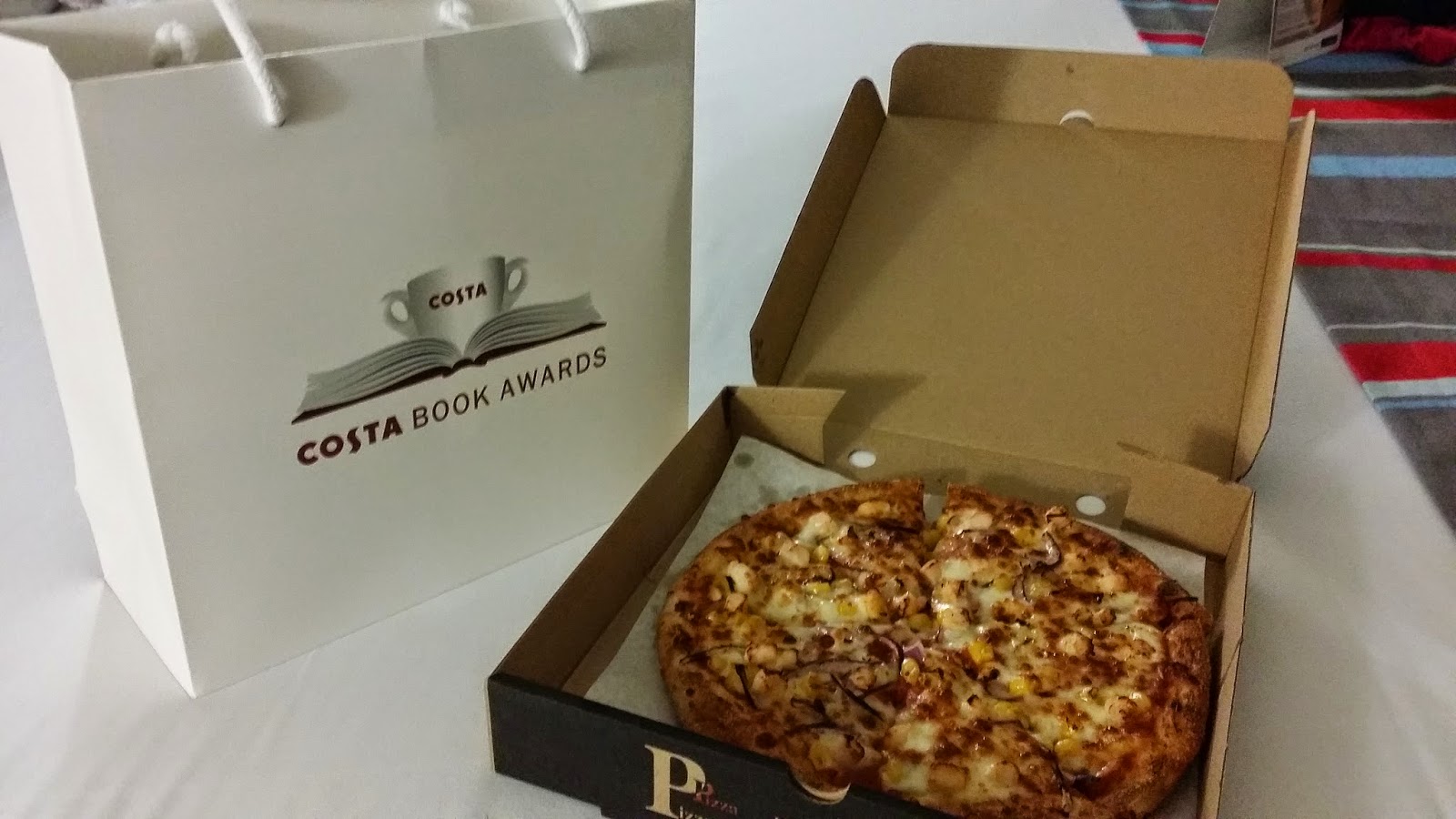 *A friend of mine recently said that my blog is always cheerful (it wasn't a compliment). It's hard to get the balance of this internet stuff right - how to be happy without appearing smug? Of course, other, less exciting things are also happening in my life: today I'll be having beans on toast for tea, followed by an early night as tomorrow I'll be doing a 6:30 am paper round for son 1 who still can't lift following last week's surgery. I have 20 essays to mark, I have PhD rewrites to do and, next week, I'll be having a small investigatory operation *crosses fingers*. And those things make last night even more special.

Five short stories from Sweet Home will be broadcast on BBC Radio 4 Extra during the week beginning 19th January. I haven't heard them in advance, so I'm really looking forward to listening. 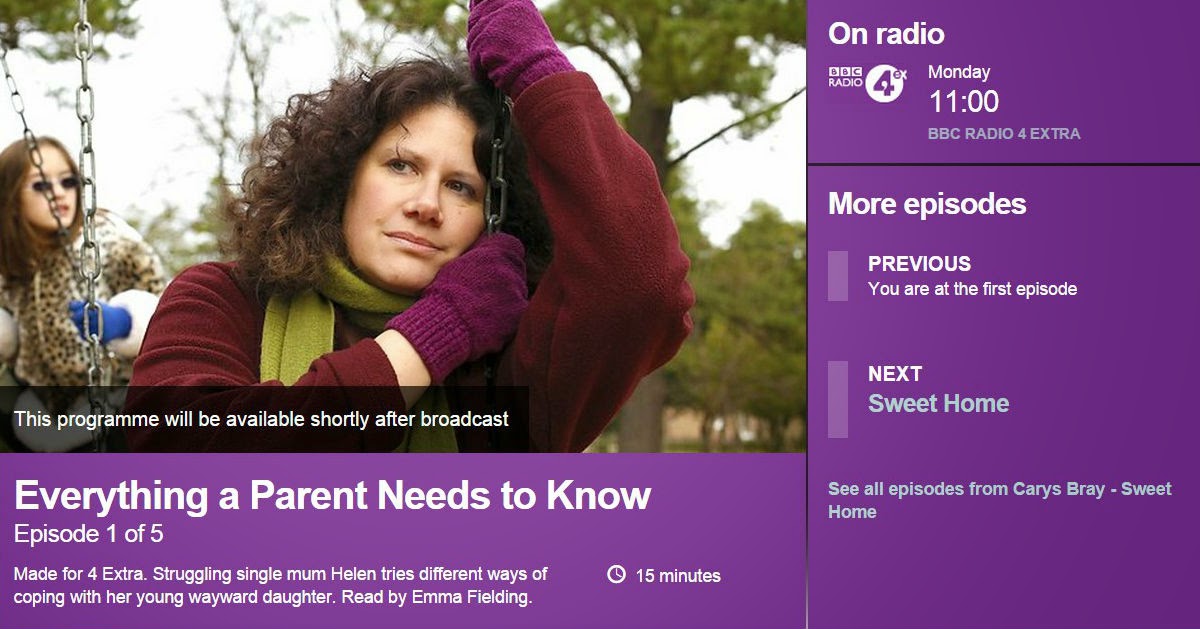 Monday 19th: 'Everything a Parent Needs to Know.' 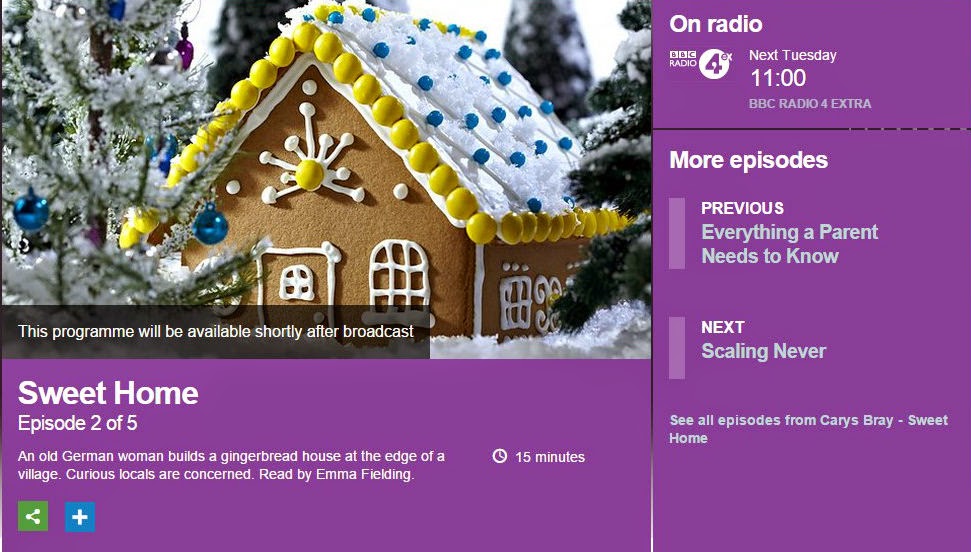 If someone had told me a year ago that A Song for Issy Bradley would be shortlisted for the award I wouldn't have believed them. I still feel excited about it - in fact, here's a picture of me feeling excited about it (and insisting that everyone else in the vicinity also be excited about it). 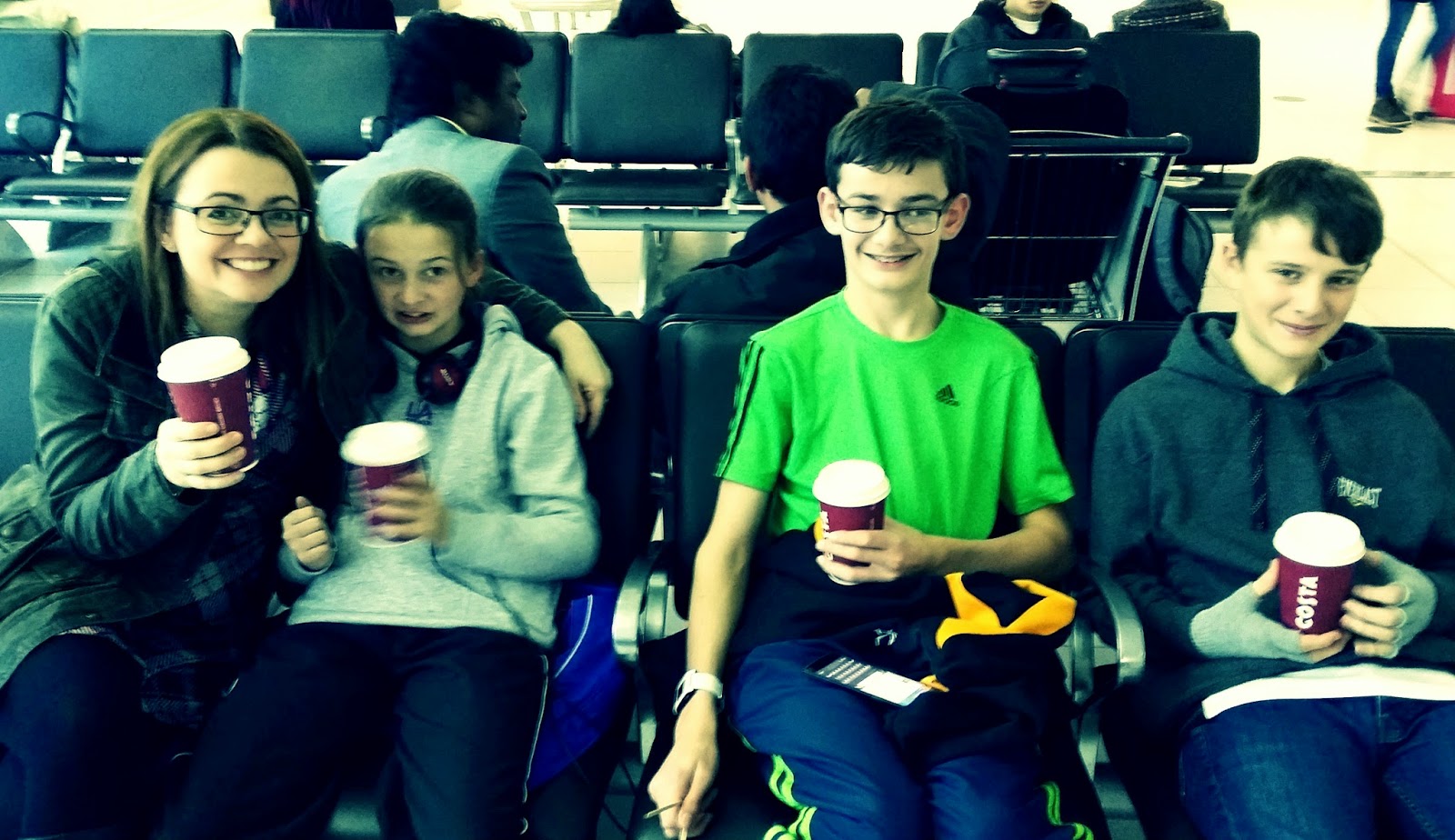 I wasn't sure whether reading the other novels on the shortlist was a masochistic thing to do, but when I received them - a gift of two halves; 2 novels for my birthday and 2 for Christmas (and yes, that means that Neil actually gifted me me a copy of my own novel - another classic present to add to the list) - it seemed silly not to enjoy them (or, at least, to enjoy the 3 novels I didn't write), especially as this may well be the only time I ever find myself on a prize shortlist. 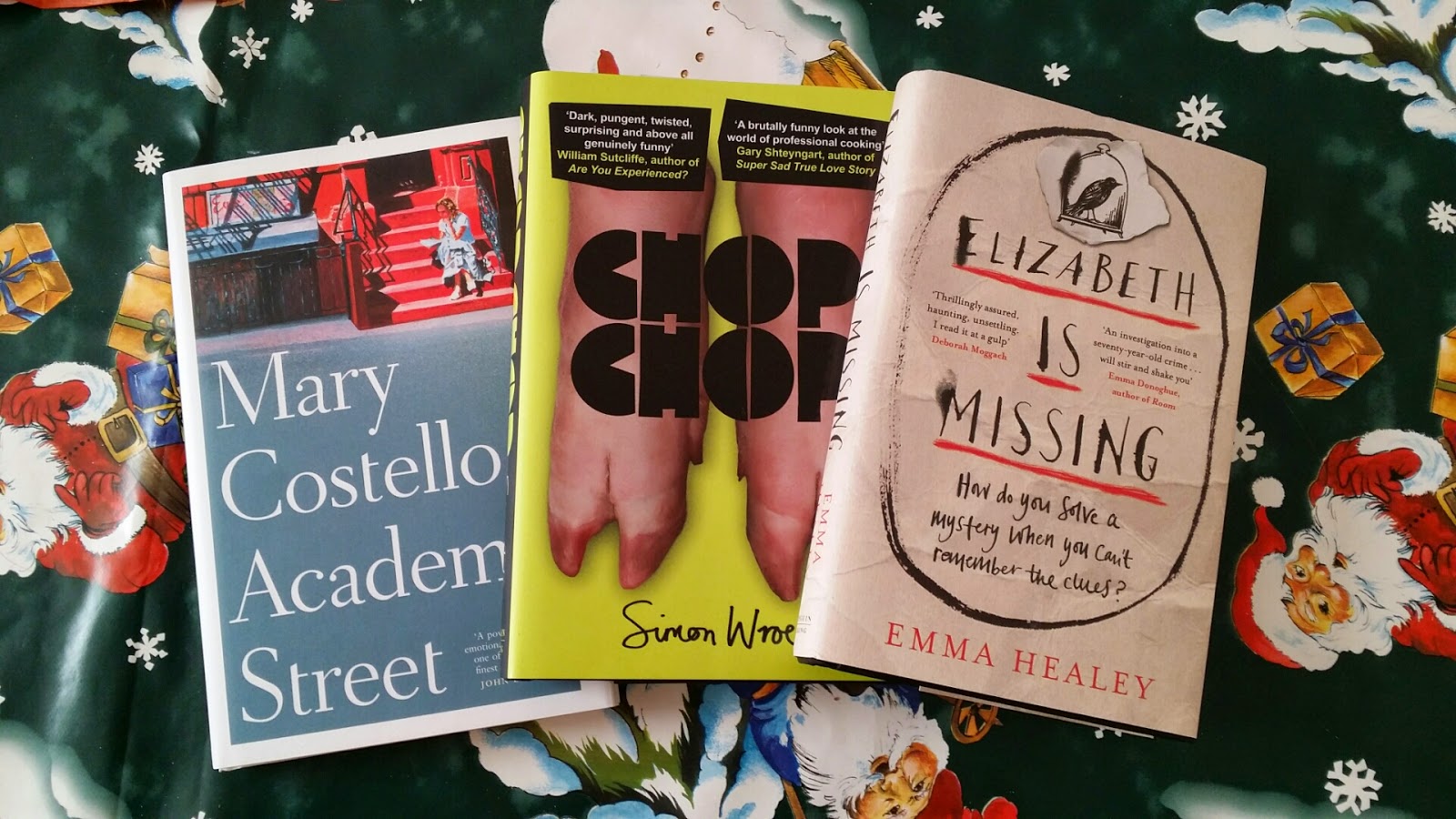 Elizabeth is Missing by Emma Healey
Elizabeth is Missing is a heart-breaking, intelligent novel. Maud is forgetting things - cups of tea, the way to the shops, her daughter's face - but she is certain of something: her friend Elizabeth is missing. Maud's world is meticulously drawn, meaning that as her narration becomes less reliable, the reader has to fill in the gaps. And these gaps are achingly sad. The final chapters, in particular, are beautifully drawn and, although the reader is incredibly moved by Maud's deteriorating condition and the long-anticipated solving of the mystery, Healey's prose remains skillfully understated and unsentimental. A cracking read.

Academy Street by Mary Costello
Mary Costello's debut reminds me of both Anne Enright's The Gathering and Tessa Hadley's Clever Girl. The novel begins with a bereavement and takes the form of a series of beautifully observed, deceptively quiet vignettes as it follows the course of Tess Lohan's life . I was aware of Costello's earlier collection of short stories China Factory (which will feature on Radio 4 Extra, 12th - 16th January) and so it came as no surprise to find that many chapters of Academy Street were reminiscent of the measured, restrained stories I admire in The New Yorker - Costello's eye for detail and illuminating prose make this an enjoyable and thought-provoking read.

Chop Chop by Simon Wroe
I knew I'd love this book by page 2. Told in Monocle's witty, knowing, voice and edited by 'Racist Dave' (who put a brick through the Salford branch of Blacks 'before he realised it was a camping store') and ape-loving trouble-maker Ramilov, Chop Chop is chock-full of visceral descriptions and gorgeous, biting characterisation. It took me a while to get through it because I kept pausing to read funny bits aloud to members of my family. But this novel is not just an entertaining romp; it's a story about loss and revenge, family and belonging, and, in addition to the chaos and hilarity, readers will be sure to find a meaty pleasure in the language itself.

So, how do I feel having read these 3 novels?

Happy. Not only did I enjoy each writer's work, I feel tremendously pleased and flattered to have been included on the same shortlist as them, and I'll be looking out for their next books.
Posted by Carys at 19:28 No comments: