The Drowning of Arthur Braxton 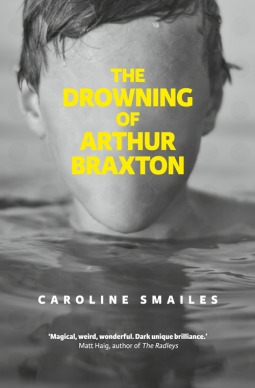 A few weeks ago I entered a Twitter draw to win a copy of Caroline Smailes' novel The Drowning of Arthur Braxton and I won - hurray! The book arrived and I didn't plan to read it straight away, but I glanced at the cover, scanned the first page and changed my mind. I read the book in twenty-four hours and I'm still thinking about it nearly two weeks later.


The Oracle used to be a public swimming baths, then I'm sure my mum said it was run by some weird folk who did mad stuff in the water before the council closed it down. The building's been around over a hundred years and people used to go mad for all the stained-glass and mosaics inside. But that was when people cared 'bout old stuff, they don't seem to care so much these days.


The Drowning of Arthur Braxton is a novel of contrasts. Smailes employs stark realism and magic in an urban fairy tale that's centred around The Oracle, a place of grandeur and decay; healing and sickness; safety and death.


The Oracle's been shut for years, I mean before I was born. It's all tired-looking and crumbling, but even I can see that there's something 'bout it that's special.


The narrative moves between times and perspectives and is occasionally interrupted by weather forecasts, travel news and missing person reports. I really enjoyed this layering of story and the way it encourages the reader to piece things together. I was particularly interested in Delphina's sections which are written as script. They reminded me of ancient theatre and the inevitability of tragedy, and I read them with a growing sense of foreboding.

The adults in this story are feckless and/or impotent - certainly culpable: Laurel's irresponsible mother, Arthur's neglectful parents, dastardly (and bastardly) Martin, Silver who can see the future but is powerless to change it, and twins Kester and Pollock who heckle from the sidelines, like the curmudgeonly old men in The Muppets (or perhaps the chorus in a Greek tragedy). The young people are likeable and 'relatable' (as young people like to say!). Laurel is trapped in an eternal adolescence, Delphina is simultaneously cosseted and imprisoned, and then there's Arthur Braxton himself, world-weary and yet painfully naive.

There were times when Arthur frustrated me. He's not particularly bright and although his artlessness is largely endearing, there were moments when I felt like shouting, 'COME ON Arthur!' and 'Just THINK about it, Arthur!' But I was always rooting for him, and there was *so* much about this book to love; the decrepit seaside setting, the terrible weather (the way the storms and rain inhabit both the background and foreground of the novel), the gritty realism, the magic, the freshness, the strangeness, and the way the story and the characters haunted me afterwards. I felt safe throughout this novel - I knew I was in good hands; with each change of voice and structure I remained confident in Smailes' ability to lead things to a satisfying conclusion. And that's exactly what she did.

[This was a hard review to write because The Drowning of Arthur Braxton isn't like anything I've read before - that's a good thing, and it's almost certainly why I'm still thinking about it.] 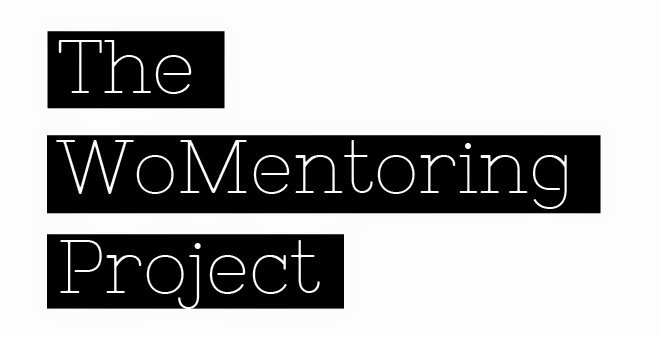 The WoMentoring Project launches today and I'm really excited to be a part of it.

About
The WoMentoring Project exists to offer free mentoring by professional literary women to up and coming female writers who would otherwise find it difficult to access similar opportunities.

The mission of The WoMentoring Project is simply to introduce successful literary women to other women writers at the beginning of their careers who would benefit from some insight, knowledge and support. The hope is that we’ll see new, talented and diverse female voices emerging as a result of time and guidance received from our mentors.

Each mentor selects their own mentee and it is at their discretion how little or much time they donate. We have no budget, it’s a completely free initiative and every aspect of the project - from the project management to the website design to the PR support - is being volunteered by a collective of female literary professionals. Quite simply this is about exceptional women supporting exceptional women. Welcome to The WoMentoring Project. 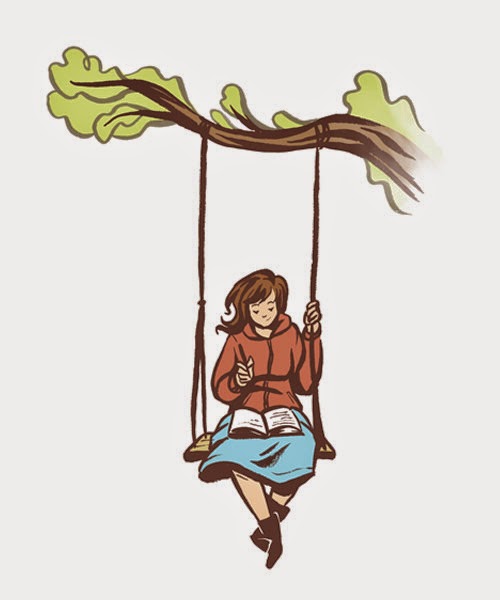 Why do we need it?
Like many great ideas the WoMentoring Project came about via a conversation on Twitter. While discussing the current lack of peer mentoring and the prohibitive expense for many of professional mentoring we asked our followers - largely writers, editors and agents - who would be willing to donate a few hours of their time to another woman just starting out. The response was overwhelming – within two hours we had over sixty volunteer mentors.

The WoMentoring Project is run on an entirely voluntary basis and all of our mentors are professional writers, editors or literary agents. Many of us received unofficial or official mentoring ourselves which helped us get ahead and the emphasis is on ‘paying forward’ some of the support we’ve been given.

In an industry where male writers are still reviewed and paid more than their female counterparts in the UK, we wanted to balance the playing field. Likewise, we want to give female voices that would otherwise find it hard to be heard, a greater opportunity of reaching their true potential. 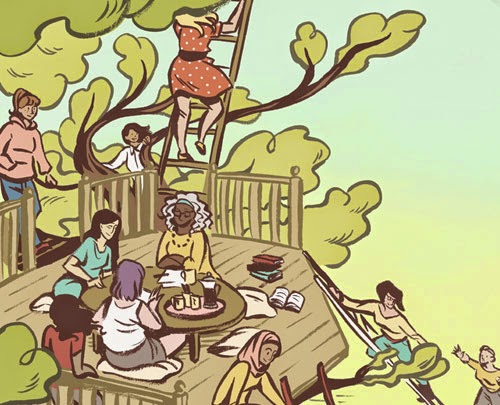 Applications
In an ideal world we would offer a mentor to every writer who needed and wanted one. Of course this isn't possible so instead we've tried to ensure the application process is accessible while also ensuring that out mentors have enough information with which to make their selection.

Applicant mentees will submit a 1000 word writing sample and a 500 word statement about how they would benefit from free mentoring. All applications will be for a specific mentor and mentees can only apply for one mentor at a time. Selections will be at the mentor's discretion.
Posted by Carys at 10:00 No comments:

Congratulations on the new book, Nik. Beautiful Words is really unusual. You employ a combination of fact, flash fiction, gorgeous illustrations and, of course, beautiful words. How did the book begin?

Thank you! And thanks for having me over. It's a lovely place. It actually began a couple of years ago when I started collecting words I thought were fun or interesting. I bought a tiny orange notebook and if I found one I liked, for whatever reason (the way it looked, sounded, felt to say it - what it meant or represented, or even what it meant, very personally, to me) I'd pop it in there.

Then I thought it might be cool to have a book full of them but realised, quite quickly when I started to write it, that it would have to be more interesting than some chap telling you what his favourite words were. And it couldn't be definitive. I actually hope in a way that people disagree with some of the entries and start thinking of what their favourites are. And that happened as Lucy and Alexander, and later Lily, appeared and I could see a narrative. And that's when the hard work began!

How did you select the words? There are so many lovely words, I imagine it must have been a difficult task.

A combination of selfish instinct (ha!) and of what would work for the story. Story always comes first. Luckily, I think (and very much hope) that they fit. We're lucky to have such a rich language with so many influences that there are loads and loads to choose from.

Yep, the idea was that it was always going to be illustrated, but the illustrations were pretty much all done between my publisher and Miranda. And when I saw them I was very, very happy.

The next books will be Beautiful Trees and Beautiful Shapes. How are you going about selecting trees sand shapes? Will there be 26 of each?

There'll be a similar number but, again, it all comes down to what's going to work best for the story/stories. The trees have already been selected, and in a very similar way to the words, which surprised me. The way they look, interesting facts about them (I've only recently discovered that some can communicate with each other - how cool is that!) the shapes of their leaves, what they mean. That kind of thing. And how they relate to Alexander, Lucy, and Lily, and to their lives. Shapes is a secret, for now. (Mostly because it's not done yet.)

Trees can talk to each other? Tell me more!

I'll not give too much away but, when certain trees come under attack from fungus or insects they release things into the air that other, nearby, trees can 'hear' which allows them, in turn, to release repellents to keep them safe and healthy, Ah, nature!

What are you going to be working on next?

Beautiful Shapes! And more traditional short stories, as ever.

Thanks Nik, and the very best of luck with Beautiful Words, Beautiful Trees and Beautiful Shapes.

Beautiful Words has been reviewed by Dan Powell and Scott Pack.
Posted by Carys at 08:00 1 comment:

This week I've finally finished John Irving's A Prayer for Owen Meany. What a book! The story was meticulously crafted; so many disparate images and ideas came together in the closing scenes. The ending was perfect (and very sad). I'm glad I read A Payer for Owen Meany, a. because it was *so* good and b. because reading it was an exercise in practice-based research. The dénouement was perfect and Irving really made me think about miracles and predestination - I think I'm finished with miracles for now, but I'm really interested in predestination, self-fulfilling prophecies, patterns and coincidences... 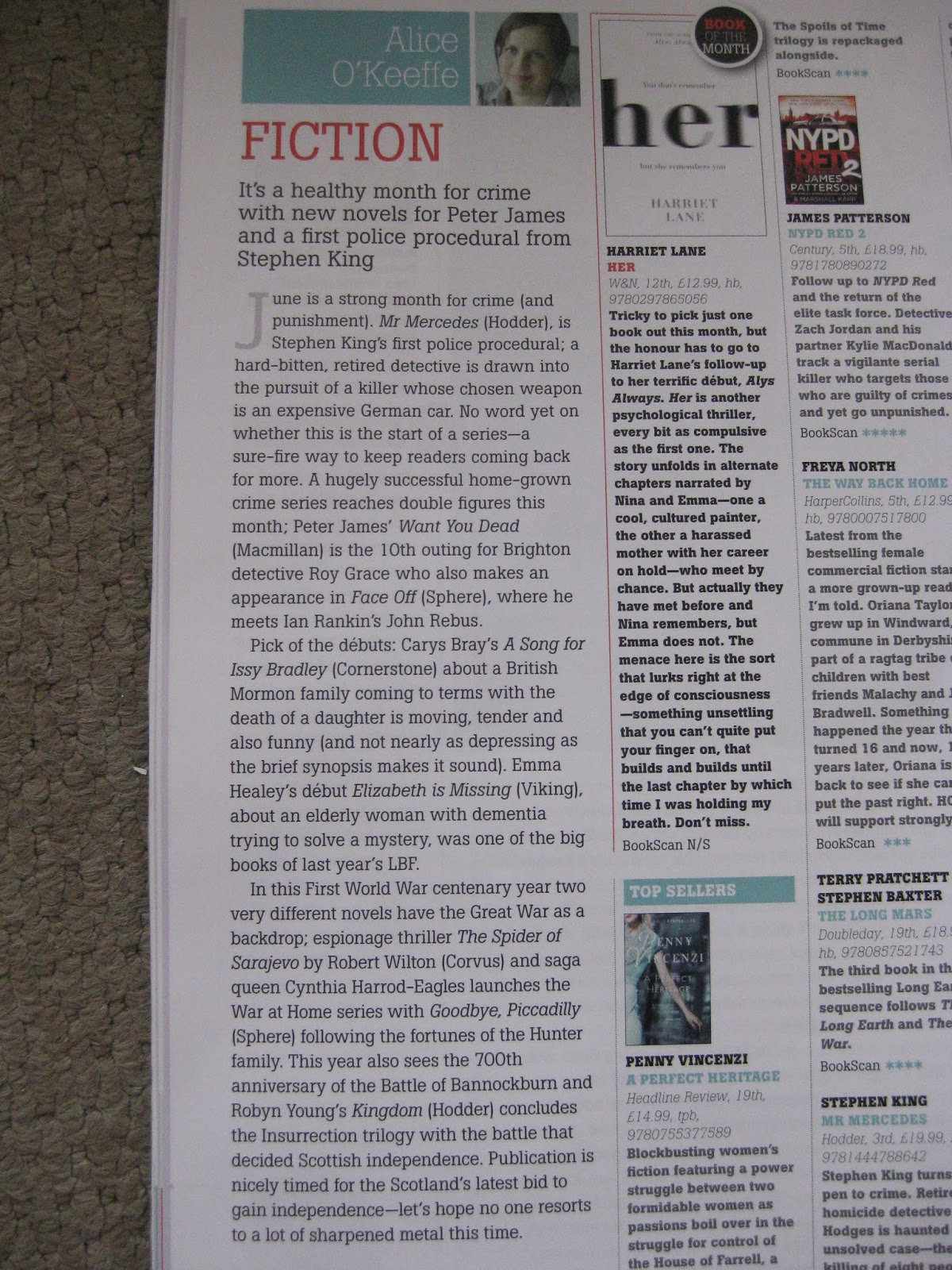 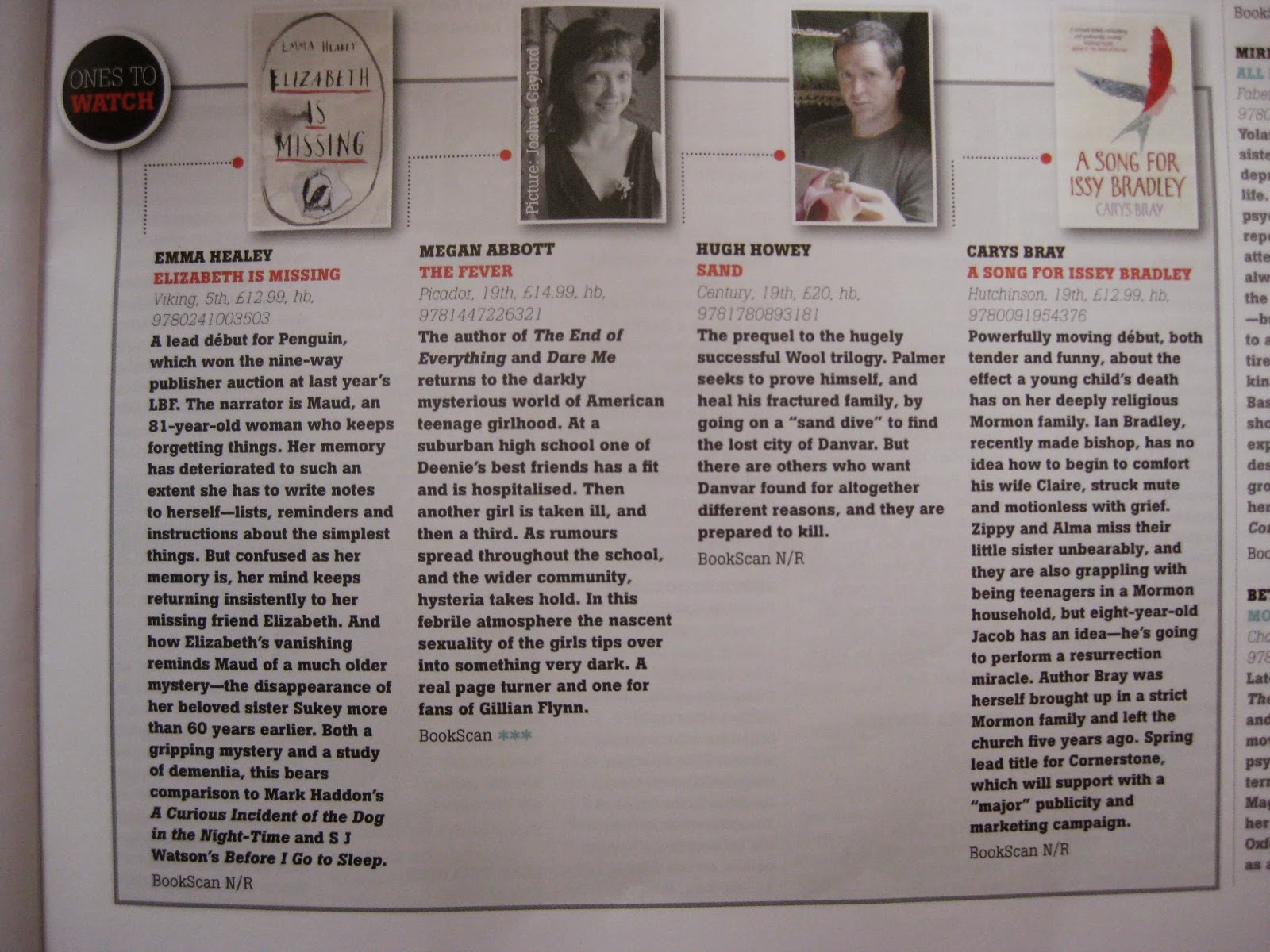 It was lovely to see A Song for Issy Bradley in The Bookseller in the 'Pick of the Débuts' and 'Ones to Watch' sections (above). It still hasn't properly sunk in that the novel exists (in proof) and (a few) people are actually reading it.

I'm starting to think carefully about novel 2. The second novel is supposedly the hardest. Yesterday I read Are We Entering a Golden Age of the Second Novel? The article quotes Steven Fry:


“The problem with a second novel is that it takes almost no time to write compared with a first novel.  If I write my first novel in a month at the age of 23 and my second novel takes me two years, which one have I written more quickly?  The second, of course.  The first took 23 years and contains all the experience, pain, stored-up artistry, anger, love, hope, comic invention and despair of a lifetime.  The second is an act of professional writing.  That is why it is so much more difficult.”

I'm not sure whether Fry's observations about the difficulty of second novels make me feel better or worse.
Posted by Carys at 20:23 No comments: