Fourteen years of bedtime story telling has left me with an inability to read without also doing the faces, as is evidenced below in a couple of short story extracts on Andrew Oldham Publishing's YouTube channel:

At Gogglepublishing you can also listen to story extracts and poems from Ailsa Cox, Robert Sheppard, Ian Parks, Andrew Oldham and others.
Posted by Carys at 12:10 2 comments:

It was surprisingly easy to do. I've put off linking to it because I've been fiddling with the words - I am an endless editor. I can't look at stories once they've been published without feeling the urge to hit the delete key and find a better way to say what I was trying to say.

In recent months I haven't blogged about anything to do with my real life unless it relates to writing in some way. I've been thinking about the way in which fiction often germinates out of real life experience. I've been trying to finish a story called, 'Love: Terms and Conditions' which has left me pondering over the different ways in which parents love their children. I've got four children. I could say that I love them all exactly the same, but it wouldn't be true, and yet I can't quantify the differences: it's not a matter of more or less, it's something else entirely.

As I type this, I'm sitting on a bench in my garden. It's warm and breezy. Cherries and pears are ripening behind me, I can hear baby birds that are nesting somewhere in the roof of my house and in a minute I'm going to get off the bench and help myself to a fist-full of raspberries. What I'm also doing out here in the garden is worrying about son number 3, the brashest, yet most easily bruised of my children.

A True Story about Son Number 3:

Son number 3 didn't say thank you to me in a private interaction at his classroom door last week and was consequently shouted at by his teacher and told to follow me as I left the school premises and apologise. When he caught up with me, his face was stiff with embarrassment and he could hardly open his mouth to get the apology out: I didn't want his apology; I would never buy a thank you with humiliation. This morning, on the way into school, he stopped in his tracks and his face hardened into the same mortified mask: he had forgotten his materials to build an alien. I told him I would go home and get them; and I told his teacher I would go home and get them. But I was forbade from doing it because, 'he must learn his lesson and miss out while everyone else makes theirs and incidentally, wasn't he rude last week when he didn't say thank you?'

I left a deflated and ashamed little boy at school this morning. But never mind, I thought. When he gets home I'll have a break from writing and play football with him in the garden. He adores football and, much to his delight, he has been having a trial at a premiership team's academy. It's not been a  picnic. He has come out of the changing room covered in Lucozade, he has hidden from bigger boys in the toilets and learned that he doesn't have the 'right' boots (horrors), but on the whole, he has loved it. Which is why we bought him a new kit and the 'right' boots on Saturday. And that made the phone call I had this morning to say that he's not quite good enough to continue at the club a little worse.

So here I am, sitting in the garden, trying to think of ways to unbruise son number 3, wondering what to say to him when he gets home from school without either a cereal box alien or an academy place. I know that neither thing really matters, I could give myself a good lecture about perspective and remind myself what's really important. But... it's the small hurts that sting: hurts like Miss Brill's. And it's small hurts that make good stories.

As to this story, here's how it's going to end: the love I feel for son number 3 is an alleviating, witch hazel sort of love. When I pick him up from school, I'll try to pour it on his bruises, if he'll let me. I'll play a bit of football with him, make him something he really likes for tea, and then later, after he's gone to bed, I'll think about the way that fiction often germinates out of real life experience and get typing.
Posted by Carys at 14:46 2 comments:

Searching for 'Mud: Stories of Sex and Love' 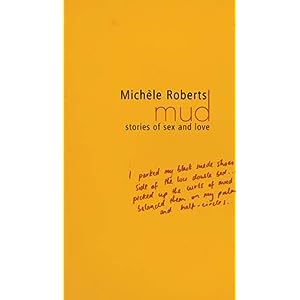 Since reviewing Michele Roberts' collection 'Mud: Stories of Sex and Love', I've noticed some interesting trends in the searches that are leading people to my blog.

'Mud: Stories of Sex and Love' is a collection of literary short stories, characterized by beautiful language and astonishing descriptions of the countryside: naked wrestling and other activities involving mud do not feature. If you have stumbled across my blog while looking for such entertainment, can I recommend the Edge Hill Prize shortlist instead? I am sure it is much more entertaining than sexy mud, mud sex, sex in the mud and the other unmentionably naughty things you people are looking for.

The kind of week I used to dream of

Stuff that has happened this week:

On Tuesday I had three stories accepted for publication within the space of a couple of hours, something which felt surreal and very lovely, especially in the light of this recent blog post.

Tom Vowler unveiled his new website on Wednesday and I was inspired to have a go at building/making/creating (not sure what the website verb is) one myself. I finished the website just after midnight and I'll link to it soon, when I've stopped editing the text (which may happen one day).

I'm finally close to finishing a story called 'Love: Terms and Conditions' that I began more than a year ago during my MA - some stories take forever. I really like this story and I hope that after its outing at the Narrative Research Group last night I can tweek it into submission (both kinds).

The Open University advertorial about my BA experience was published online this week. Studying with the Open University helped me to envisage a future in which I would grab back shelved dreams and ambitions. And here I am, grabbing stuff (small stuff, but still...). I'm on a literary trolley dash, reading books and writing stories that I should have read and written years ago, finally unrestrained by the 'silken shackle on the legs of millions of women' that is niceness (that quote needs a whole blog post and a back story - but it comes from Mormon writer Elouise Bell's essay 'When Nice Ain't So Nice').

It's been the kind of week that would have been complemented by a box of Thornton's chocolates but, for the first time in four years, I'm going on holiday this summer, so I've managed to resist.
Posted by Carys at 13:02 4 comments:

Flax launch and other stuff...

Today was the Flash Mob, Flax026 launch. I read at The Storey with the other authors who have flash fictions in the anthology.

You can listen to all of the stories and look at the author profiles here.

It was a really good afternoon. Claire Massey read her modern fairy tale A Book Tale again which meant another outing for the fabulous word dress.

The even has been blogged about by Sarah-Clare Conlon at Words and Pictures and Clare Kirwan at Broken Biro.

It's been a good week for writing; I found out that I'm going to have a story in Mslexia next month - I can't really say how exciting that is for me...THIS exciting perhaps.

My guest post is now up on the Strictly Writing blog.

Additionally, the Open University asked me to participate in their new advertising campaign which gave me another chance to tell an interviewer how much I love the Open University; something I have done quite regularly in recent years - and I mean every word. I'm not entirely sure what the ads will look like, but I had a photographer from the Express at my house at 8:50 this morning wanting to take pictures of me surrounded by books: good job I've got so many then.

Email ThisBlogThis!Share to TwitterShare to FacebookShare to Pinterest
Labels: Flax

Sticking to the Letter

A fantastic article here about Edge Hill Creative Writing MA student Sue Stout who recently won the GQ Norman Mailer Award with her piece Sticking to the Letter.
Posted by Carys at 09:18 No comments: