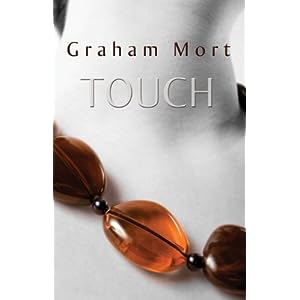 Graham Mort won the main prize for his collection 'Touch'.

Tom Vowler won the readers' prize for his collection 'The Method and Other Stories'.

Avril Scott won the MA prize for her story 'The Limitless Possibilities of Life'. And Claire Massey's story 'Marionettes' which will be published by Nightjar Press in 2012, was commended by the judges

It was a lovely evening. All of the shortlisted authors were present except for Graham who was teaching writing in Uganda. I met writers Michele Roberts, Polly Samson, Tom Vowler, Elizabeth Baines and Alison MacLeod for the first time. Jeremy Dyson who won the main prize last year announced the 2011 winners, and Helen Simpson was there too, but I didn't get chance to speak to her which may have been a good thing considering how star-struck I was last time I met her.

I also met two of my favourite short story writers again: Adam Marek and Rob Shearman. I was extremely excited to hear that Adam is working on short stories for the rest of 2011 following his Arts Foundation Fellowship and during the course of the evening I somehow managed to separate Rob from a copy of his brand new collection 'Everyone's Just So So Special' (actually, he gave it to me because he is lovely and I grasped it tightly in case he changed his mind). I can't wait to begin reading it.

After the award ceremony I stayed up until the early hours reading the final chapters of my friend Jenn Ashworth's new novel 'Cold Light' (fantastic story-telling and characterization; well worth the tiredness today). This morning I had a look around the British Museum's Treasures of Heaven exhibition which was delightfully macabre and resulted in dozens of scribbled notes on my tube timetable. Before Ailsa Cox and I caught the train back to Southport I bought a huge box of Krispy Kreme donuts which means that my children love me tonight and a couple of other things are also making me smile: I had my PhD admission viva on Thursday and I'm in! I was also successful in my application to be an Associate Creative Writing Tutor at Edge Hill; I start in the autumn.


Photographs of Tom, Avril and Jeremy are from the Edge Hill website.
Posted by Carys at 18:58 2 comments:

I've got a story called 'The Countdown' in the current issue of Mslexia. Guest editor Salley Vickers selected the poetry and prose in this issue and in her introduction she said the following about my story:

‘The countdown’ was the only OCD story I truly liked, maybe because it used a male voice and I think the ability to cross gender is the mark of a real writer. As with ‘Ego, me’ (also a male narrative voice), the author knew her stuff – the mounting parental anxiety of the father-to-be was keenly observed and conveyed, very authentically, the appalling and perpetual torment of irrational fear.

I'm really pleased by Salley's comments, especially as I'm researching a particular strain of OCD for my PhD project (admission viva is on Wednesday 6th) and 'The Countdown' was very much an exercise in practice based research.


I've also got a very short story called 'What it's Like' at The Pygmy Giant which is a great place to read flash fiction: click on the link to select a FREE short story to accompany your mid-morning cup of tea/coffee; you'll be entertained and it's healthier than a biscuit!
Posted by Carys at 13:28 No comments: