Yesterday I took my daughter to Clarks to buy some new school shoes. She didn't actually need new shoes, she has a perfectly good pair of Clarks shoes that still fit her, but they are boys' shoes. Alice has worn boys' shoes to school for a number of years (for the reasons she outlines below), but she is starting a new school next week and is feeling a little anxious about fitting in and making new friends, so she asked if I would buy her a pair of girls' shoes.

When we arrived in the shop we discovered that there was a new element to the measuring process. It involved Alice having to select a BOY or GIRL icon on the iPad and then choose either a pink or blue character, or the Clarks logo (which Alice chose). When I asked why she needed to select BOY or GIRL I was told it was to increase interactivity. So, before we even got down to the matter of the shoes themselves, we were faced with boy/girl, blue/pink choices.

We looked through the girls' shoes. The vast majority were ballet style - pretty impractical for school, especially in a country where it rains frequently. The shoes that covered the whole foot were pointy, not the kind of shoes in which you'd want to play football at break times.

Alice tried on some shoes. And then she had to decide whether being physically comfortable was more important than being socially comfortable. She chose to keep wearing her boys' shoes.

This morning I saw a link to Hollie McNish's blog on school shoes. And I thought, instead of just complaining around the dinner table (yet again), I'd write about my experience, too. It's only when a lot of people point these things out that things can change, right?

When my daughter saw what I was doing, she decided that she wanted to write to Clarks. I helped her with one or two spellings, but the words are all her own (as are the "air quotes"). 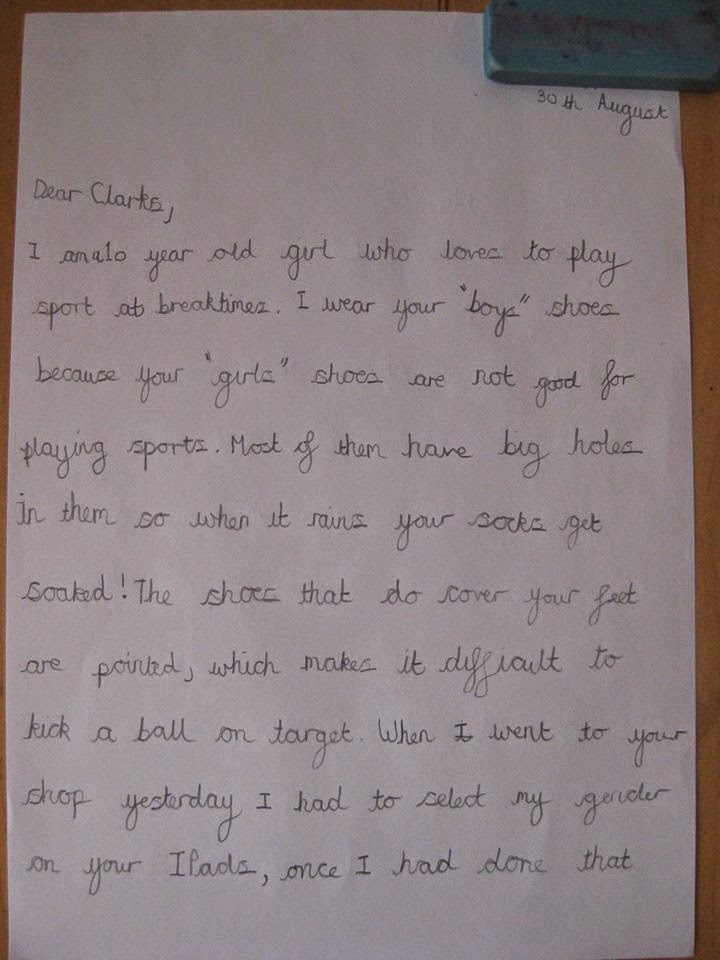 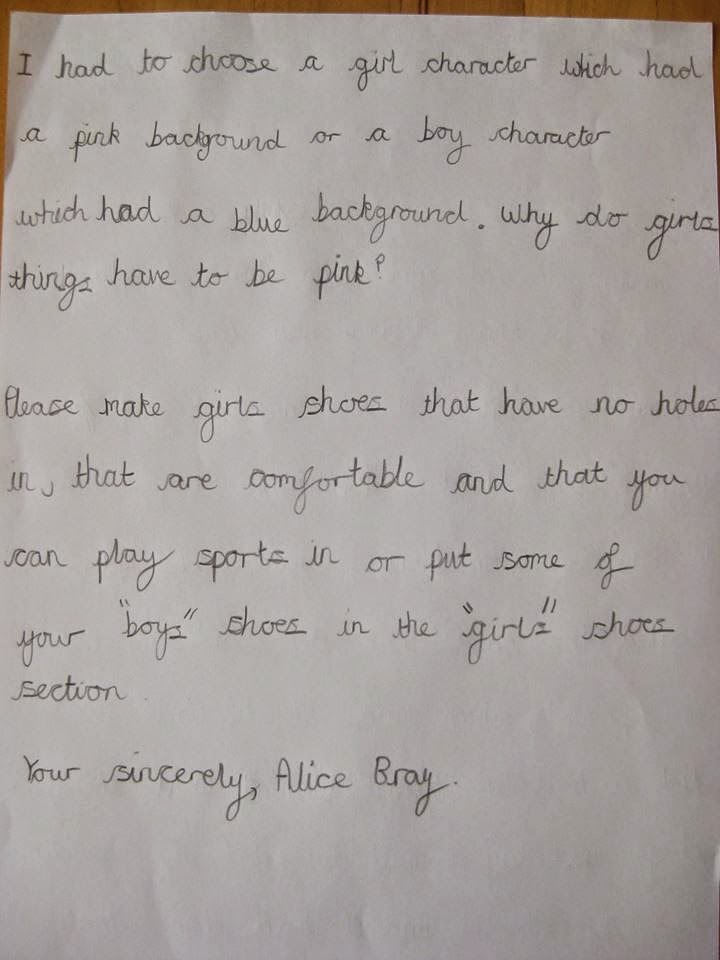 I went to buy P.E pumps and discovered that they now look like this. Which reminds me of BIC pens for her. 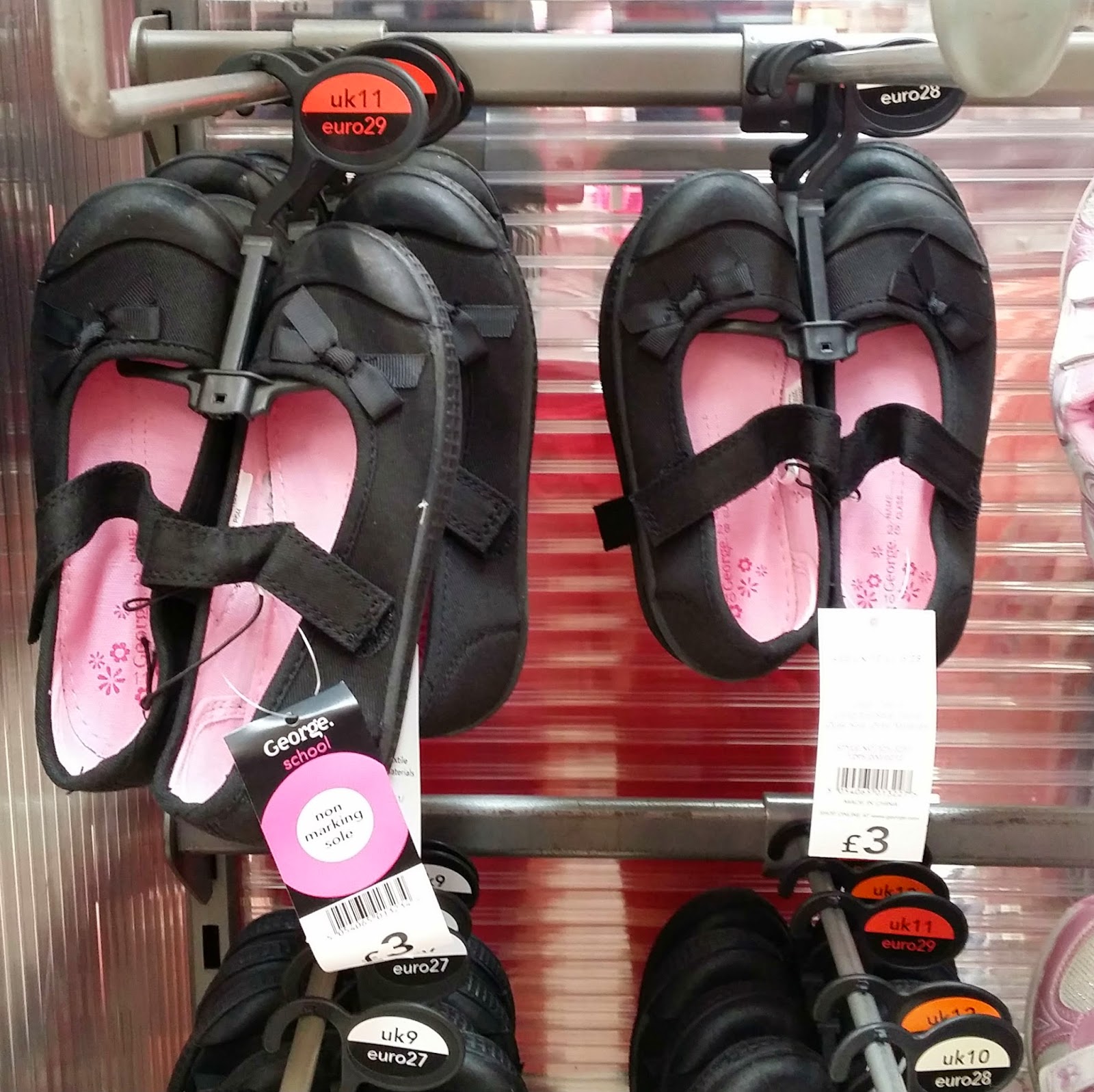 Take it Cool by Jonathan Pinnock

Jonathan Pinnock is a prize-winning poet and short story writer. His fiction has featured in numerous anthologies and has been broadcast on BBC Radio Four. I first came across his writing when his sharp and witty collection Dot Dash won Salt Publishing's Scott Prize. I spoke to him about writing and his new book Take it Cool, a bio-historico-musicological-memoir.

When did you start writing?

I've gone through various phases with writing. Back in the early 90s, when the kids were of an age where they'd read anything I stuck in front of them, I wrote several childrens' books. I got some nice letters back from publishers but never quite had the persistence to break through. Then in the late 90s I ended up writing a book on software development and contributing to another dozen. That all fizzled out in the mid 00s when (a) my publisher went under and (b) I realised that what I really wanted to do was have one last go at getting some fiction published. So I tend to think of myself as having started writing for real in around 2005.

You won Salt Publishing's Scott Prize for short stories with Dot Dash and you are the author of the Pride and Prejudice sequel, Mrs Darcy versus the Aliens. You have also written prize-winning poetry. Take it Cool seems like a departure from your usual writing. How did you come to write it?

All my books are quite different, in fact - especially if you include Professional DCOM Application Development (yes, that was what the software one was called). So I tend not to think of it so much as a departure as a case of me not having made up my mind about what sort of a writer I want to be yet. Having said that, I'd like to think that if you picked up any of my books (even the DCOM one), you'd be able to tell they were by the same person.

Do you prefer writing fiction, poetry or non-fiction?

That's a bit like asking which of my kids I prefer :) I find any type of writing equally infuriating and equally rewarding. When it's going badly, it's like wading through treacle, whatever the style or genre. When it goes well, it's the best thing in the whole world ever.

Which book do you wish you had written?

The non-fiction book I wish I'd written (although in order to do so I would have had to have put myself in some deeply scary situations) is Jon Ronson's "Them: Adventures with Extremists". It's extremely funny but also massively illuminating, like all of his books. The fiction book I wish I'd written is Steven Hall's "The Raw Shark Texts", which somehow contrives to be funny, moving and thrilling while at the same time weird, mad and experimental.

What are you working on at the moment?

Good question. I'm playing around with various ideas that occasionally look as if they're going somewhere and then fall apart when my back is turned. However, I'm starting a Creative Writing MA very soon (well, it's about time) and I'm hoping that will stimulate me to actually commit to something again!

Thanks Jon, and all the very best with Take it Cool.

Read an extract from the opening of Take it Cool here
Posted by Carys at 19:16 No comments:

Although it was very exciting, it was also very strange to listen to A Song for Issy Bradley on BBC Radio 4. When I found out that the novel had been selected for Book at Bedtime I was delighted and curious about how it would be condensed. It must be tremendously difficult to abridge 105,000 words into 10, fifteen minute segments, and I'm very glad I didn't have to do it because a) it would have taken me ages and b) it would have driven me slightly batty.

There were lots of lovely things about the production. Emma Fielding has a beautiful voice and I loved the music, particularly the guitar melodies that separated segments. (I especially liked these during the second week, when they were slightly more cheerful, and reminded me of The Princess Bride).

[*Spoiler alert for this paragraph*]
Listening to such a small snapshot of the novel was almost like listening to a synopsis, but the story didn't open in the same place as it does in the novel, and things happened in a different order at the end. Claire's journey to the beach wasn't included (she was just suddenly there) and the dangers of the environment (the fact that she'd been cut off by the tide) passed without mention. This made the ending a little mystifying: Claire went out for a walk, the children and Ian followed, they called to her and she turned around, The End. I'm not sure that the final scene works without an element of peril; the drama comes from Claire's hesitation as she makes the choice to either stay in this world or allow the racing tide to drag her into the next.
[*Spoiler alert for this paragraph*]

Last week I also received three copies of the audio book (unabridged). One of the children pinched a copy, along with the only CD player in the house, and disappeared up to his room. I followed, and we listened to the first CD together. Then we took the box out to the car and listened to the rest of the book as we drove to holiday clubs and the supermarket.

Emma Gregory reads beautifully and she does fantastic accents. Again, it was both strange and exciting to listen to someone else's version of the novel. One of the peripheral characters had an Irish accent (which wasn't at all problematic, just unexpected) and there were times when expression and interpretation led to some scenes being softer and others more challenging than I'd intended, which makes me wonder about voice and dialogue in my new novel - are there already different ways of reading the (admittedly rough) first few chapters? I expect so. And is it possible for me to be more aware of this than I was when writing A Song for Issy Bradley? Perhaps, although I'm not really sure.

Talking of interpretations and adaptations, this week I wrote a blog post for My Book, The Movie. As suggested by the title, the blog is one in which writers discuss imaginary film adaptations of their novels. You can read about mine here.
Posted by Carys at 15:58 No comments:

It's really going to happen! A Song for Issy Bradley will be BBC Radio Four's Book at bedtime, beginning on Monday 11th August, for 2 weeks.

I'm excited to hear it and find out how it has been abridged. 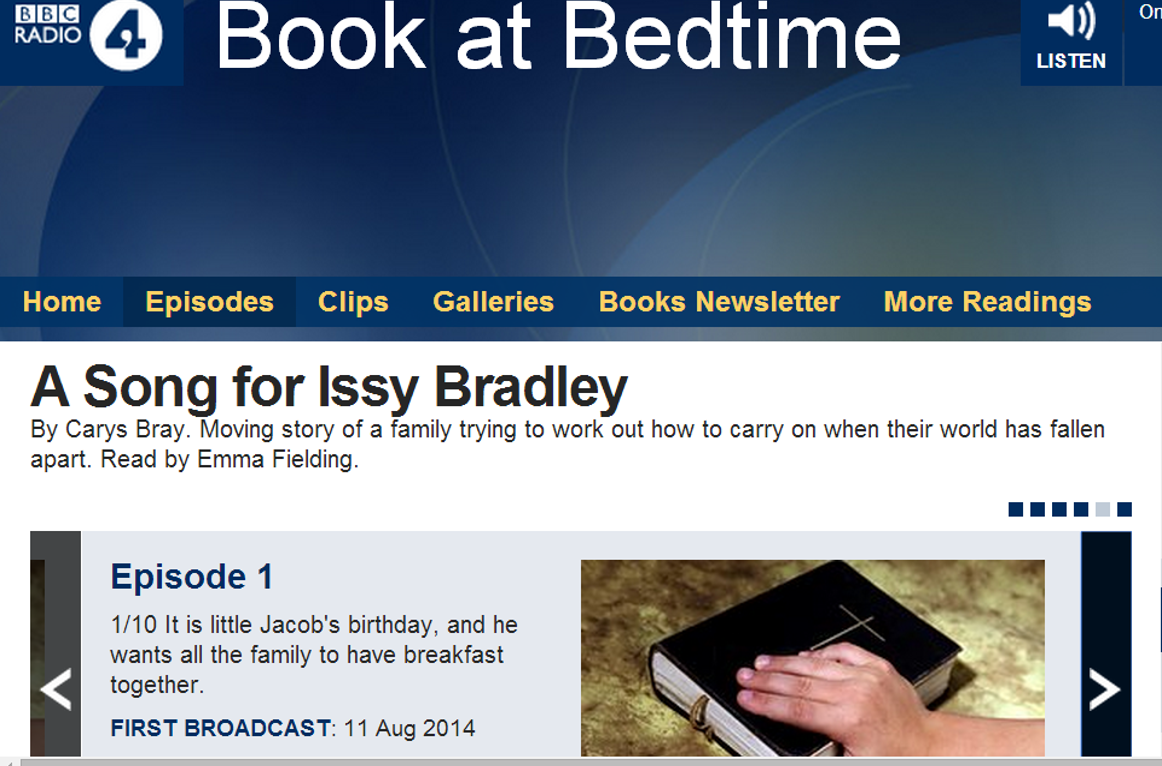 My bags are packed and I'm ready to fly home. I've had a lovely time in Utah. I met some really interesting people and listened to some excellent papers and panels at the Sunstone Symposium - the history of excommunication, perspectives on patriarchy and the Ordain Women movement, Mormon food, the problems of heterodoxy - all sorts of fantastic stuff, and I even appeared (very briefly) during this Fox News report.

Here's Jenn and I doing the work part of the trip - presenting 'British LDS Fiction: Conflicts and Contexts.' 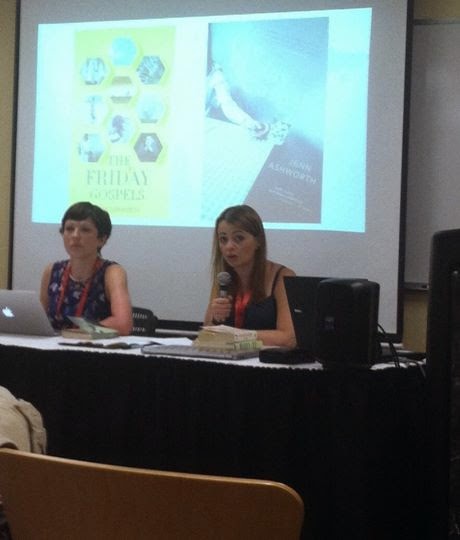 And here we are having fun with our friend Holly Welker. 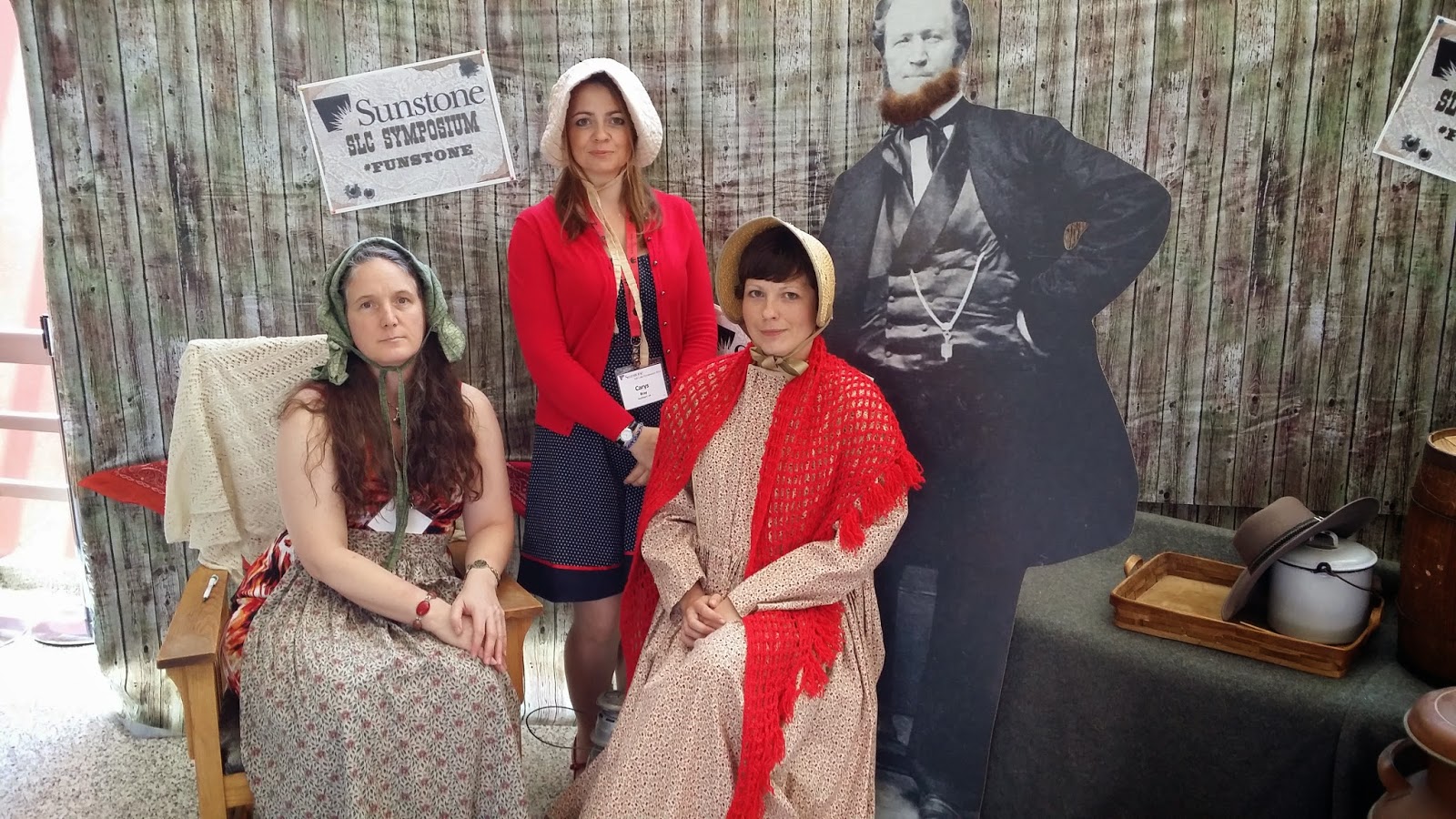 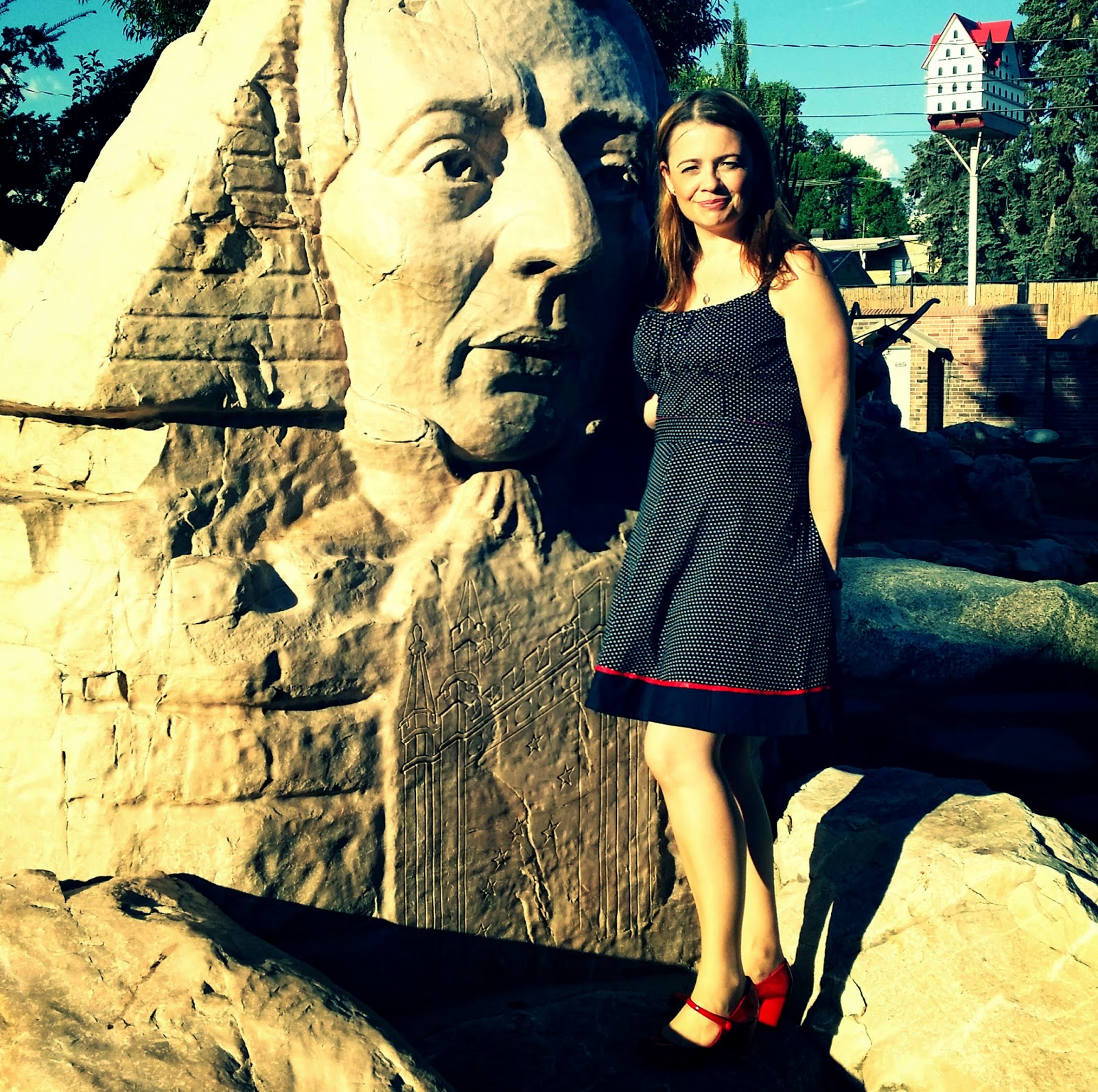 Now it's back to England and back to writing. I can't wait.
Posted by Carys at 17:07 No comments: