Poet and writer Alison Lock's short story collection Above the Parapet was published in April 2013 by Indigo Dreams Publishing. Her stories have been described as 'soulful, unsettling and beautifully written.' Below, she discusses the interesting relationship between poetry and short stories and her writing influences.

Questions of Influence and Origin from Above the Parapet by Alison Lock.

Before I draw up a list of influences I must describe to you how I work. I began by writing poetry and poetry for me comes from a thought that triggers a reaction somewhere in the area of my heart. It is never a process whereby I sit down and work through an idea or set off along a line of research (that comes later with subsequent drafts and when I need to confirm the facts). Neither do I look for a story that will fit into a traditional plot structure.  What I do know is that there is a point quite early on when I know if I am writing a poem or a story. I suppose, for me, a story is an elongated poem, at least in its process if not its outcome. Each story is a journey with words that feel their way along the lines of the page wanting to go further, often it is on the border of prose and poetry, sitting uncomfortably at the edge of a genre, nudging its way into another. I suppose I can only describe it as an instinctual process.

Often the stories originate from events that have happened during my lifetime, for instance; the eruption of the Eyjafjallajokull volcano in Iceland in 2011 triggered the story Ashes for Roses. Not all the stories are set in the past; on the contrary, some are in the present and even the future. Neither are they necessarily written in the first person; they might be in the third or even the second person, the latter being a good way of turning reader into protagonist. Sometimes a story is based on a single incident or a social or political situation that is nagging at my consciousness, for instance: climate change, female emancipation, euthanasia, corporate society, loss of the aesthetic in the modern world, but also it might just as easily come from a childhood memory. 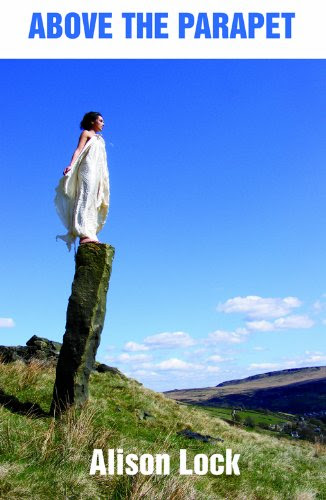 Some of the stories in 'Above the Parapet' have been described as quite dark in their subject matter. I decided early on that I would not baulk from reaching into the darkest recesses albeit with Kafkaesque results. Death is a universal human inevitability and our state of impermanence is often ignored, but, like the Grim Reaper of medieval times, it will always be there in the wings. In ' The Hanging Tree' I question how it would feel to regret one's life's work however much job satisfaction has been attained in its execution (no pun intended). We rarely have the opportunity to assess our roles in society until the time comes when we are separated from them.  This story finds a world without redemption, but you'll glad to hear that most of the stories hold the promise of a new or at least another life beyond.

A prevalent theme is about a closeness to the natural world; whether literal, emotional or spiritual. 'The Colour of Glass', set in a futuristic world, is the home to the last survivor of the old world.  Nan is old in years and some in the community feel that her 'hobby' of glass making has been indulged for long enough. The threat of euthanasia lingers over Nan as the Board meet to decide her fate. Will anyone understand the need for objects that are beautiful, that transcend the everyday?

As for my influences from the literary world, it is difficult to know as there are so many that I admire so I have picked a few that I have read recently or have had an impact on me:

Why do I write short stories? I like to explore different ways of seeing the world and the short story is a neat conveyor of thoughts and ideas where a writer can hope to leave traces of words that will trigger thoughts or ideas in the reader. As for 'Above the Parapet', the reader may 'get' the stories or they may not, but I am willing to take the risk, because without risk we cannot be true to ourselves.

The Colour of Glass (excerpts)

'She blows and wields the molten glass, twirling the glowing poker, holding it up and beating it down onto the marble slab, bending the treacle, forming spouts, lips, handles, loops. She nips and tweezes until she is content with her vision of transparency. Every shelf is full, three deep with lamps and goblets and jugs and bottles and even a bowl of glass eye balls. Her work is her life but her life began in another world. The items she makes no longer have a practical use. Now, there are synthesised materials, so easily produced and cheaply too. They can be moulded into any form that is required.

There are some who still enjoy the beauty of glass objects but they do not speak of it. There is nothing to be gained from indulging in visual satisfaction, they are told, it is an outdated concept from an old world when people believed in something called the imagination, an intangible thing that cannot be proved, and therefore, does not exist. Such beliefs are dangerous in this new world and Nan has been indulged for long enough.

...Third generation Orbisher, Jonti P, is seated at the boardroom table where the shiny surface reflects the piles of legal papers, the evidence for the case. The light from the window has draped a pearly sheen over the room and the deep shadows accentuate the features of those present. Jonti’s elbows are propped on the table and he chews his tongue as he twirls a lock of blond hair. Morality and mortality do not interest him. He would prefer to be at his work in the lab amongst the test tubes and Petri dishes than to sit around a table discussing human resource levels. At least experiments are methodical, they have specific aims, they have hypotheses that can be verified, falsified, validated. Here, there are no absolutes, no obvious conclusions.